THE ONE NIGHT STAND BY ELIZABETH HAYLEY-REVIEW AND EXCERPT TOUR 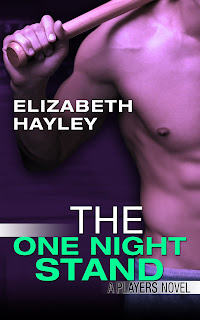 Gabriel Torres thought his life after Major League Baseball would be simple and quiet, or at least quieter. However, as he takes over running the exclusive Players Club, he finds himself continually embroiled in scandal and drama. Surely nothing, and no one could make his life any crazier...Right?

Rachel Adler is a blast from Gabe’s past who crashed back into his life with the finesse of a freight train. But she's a welcome distraction. At least for a night.

Rachel has been working hard to become one of the top sports journalists in the country. She doesn't have time for a long-term romance or irresistibly charming baseball players. A one-night-stand with the man who she knew would hit it out of the park was all she wanted.

But when she gets a tip that Gabe could have ties to one of the biggest sports stories in history, a story that could make her career, Rachel decides that maybe she has a little time for the sexy baseball player after all. As she gets in deeper with both her story and Gabe, Rachel begins to question who she is, what she wants, and what exactly she’s willing to sacrifice for her career.

Will the potential grand-slam romance be stopped short or will Rachel and Gabe be able to go the distance?

This was my first book from Elizabeth Hayley. I always love a good sports romance and second chance romances so this definitely caught my eye. Overall, I liked the book.

Gabe and Rachel have a past-obviously since I said this was a second chance romance, right? So I liked seeing them rediscover each other, liked seeing realize the spark was still there and that it had the potential to be more. I truly liked them together. They had good chemistry, the sexy times were definitely sexy.

My issue was how long things were kept a secret between them. I understood that there was going to be an element of secret keeping but honestly, it went on too long for me in this book. It pulled me out of the story at times because I was frustrated with how they behaved.

The writing was clean, the characters were believable. I just didn't get that zing of connection to them. Did they connect? Yes. But I just didn't ever fully connect with either of them. I will try more from these authors in the future and do recommend this book overall.

“You have too many clothes on,” she said as Gabe nipped at her neck. “I agree. We should probably do something about that.” “We definitely should,” Rachel replied. She’d barely gotten out the words before Gabe had her moving through his hotel room toward the tall king bed and placed her on it, letting her legs dangle over the sides as he backed away to pull his Commanders jersey off. She gave him this little grin as she brought a finger to her lip and bit on its edge. He wondered if she knew how hot she was--if the act was intentional. But truthfully it didn’t matter. “Is it weird that I want to tell you how hot your chest is too?” she asked. The comment made Gabe smile as he popped the button of his jeans and unzipped them. He’d just begun to pull them down when Rachel said, “Leave them on.” Then she sat up and grabbed his waistband to pull him toward her. His erection, which was still straining against his jeans, perked up even further as Rachel’s lips slid over his lower abs. It was an image he’d file away in his brain for future use: her head moving near his cock as his fingers tangled with her dark hair. He let out a low groan when her hand pressed against his dick. She played with it over his pants for a while before pulling down the zipper the rest of the way and yanking down his boxers enough to free him. She stroked him a few times before Gabe needed his lips back on hers. His thumb stroking her cheek as he kissed her. Her moans grew louder as he rubbed against her, but finally he was able to pull himself away from her long enough to undo her skinny jeans and slide them down her legs. Her thong was next, and he savored the visual as the black lace traced over her skin. He fished a condom from his wallet and tore it open. Squeezing himself as he rolled it on held back his orgasm. Jesus, he couldn't wait to be inside her. He hadn’t thought about her in a while, but God, when he used to think about her he’d imagine how warm and wet she was. And it was that thought that had him returning to her, guiding her down on the bed to he could press into her. Somehow all of his fantasies couldn't even come close to the real thing. Her legs wrapped around his ass as her nails dug into his jeans to guide him even deeper inside. Then they began to move together, their bodies responding to the other’s in a way that he wasn’t sure he’d experienced before. She seemed to almost melt against him. The moans and choppy breaths that escaped her had him speeding up, though he didn’t exactly want this to end. He used his forearms to prop himself up so his weight wasn’t on her completely as he thrust into her. Her nails were on his back, scratching over his shoulder blades before sliding under his boxers. He tensed as her fingertips brushed over his ass, and he willed himself not to come anytime soon. He never thought he’d have Rachel Adler in his bed, and now that he did, he wanted it to be fucking memorable. And not just for him. He knew he’d never forget this. Though her legs were clamped around him, he pulled out almost completely and then drove back in. His thumb went to her clit the next time he withdrew, making her practically quiver beneath him. She was close, and he knew it. A few more steady thrusts into her had Rachel begging him not to pull out again. Her words only increased the pleasure of the moment for him, and he thought about how he’d never get enough of Rachel’s soft please. “Please, Gabe. God, yes. Make me…” But she never finished her sentence before her body quaked with the orgasm that Gabe could feel too. Gabe continued to pound into her until her climax faded enough that he could speed up to find his own release. He wasn’t even sure what he said as he came, but whatever it was he couldn’t help it. It was probably the hardest he’d come in a while, and Rachel had been the one to make him do it. Jace wasn’t the only one who’d won tonight.

Elizabeth Hayley is actually "Elizabeth" and "Hayley," two friends who love reading romance novels to obsessive levels. This mutual love prompted them to put their English degrees to good use by penning their own. The product is Pieces of Perfect, their debut novel. They learned a ton about one another through the process, like how they clearly share a brain and have a persistent need to text each other constantly (much to their husbands' chagrin).

They live with their husbands and kids in a Philadelphia suburb. Thankfully, their children are still too young to read.

Elizabeth Hayley's writing motto is best captured by the words of Patrick Dennis: "I always start with a clean piece of paper and a dirty mind."