TURNED UP BY ERIN NICHOLAS-BLOG TOUR

Dillon Alexander has been Kit Derby's nemesis since third grade, when he beat her in the school spelling bee. They've been competing ever since, driving each other to be the best at everything from science fairs to bake sales. While working together one night during their senior year, they stopped bickering long enough to share an emotionally charged kiss. But a tragedy that same night left them both racked with guilt, driving Dillon out of town and leaving Kit determined to keep her distance.

Now an emergency room physician, Dillon has returned to their hometown of Chance, Nebraska. Soon he and Kit fall back into old habits, sparring in public while trying to stay out of each other's arms. But when a blizzard traps them overnight at Kit's grandmother's farmhouse, the real competition begins: Who will be the first to give in to the feelings they've denied for a decade?

This was a small town, enemies to lovers, second chance romance. It is the 3rd in the series, and while there are characters from the 1st 2 books (it's a small town romance, it would be odd if there weren't) you don't need to have read the other books to enjoy this one...although I do recommend them.

Yeah, there was a lot going on in this one, and this doesn't always work for me. In fact, if you have read my reviews, one of the main issues I have is with books that try to do too much.

But, as you will notice by the rating, this one got the balance just right.

I think because in order for it to really work, it all had to be there. The small town, the inability of them to get away from one another, it had to exist or they never would have gotten past the reason that they didn't work initially, in the past (hence why they needed to also be a second chance) and, the enemies to lovers? Well, that was the draw that kept them coming back to one another, the need to push one another, to challenge each other to be better, and to be unwilling to let one another settle for 2nd best.

It all just worked, and it worked very well.

Dillon and Kit started in high school. With an attraction that maybe wasn't handled totally correctly (but in a way that is forgivable, with an encounter that left them both feeling just a little guilty...even though they didn't need to feel any guilt at all) and the resulting time and distance separation that they needed to find their own footing without one another constantly there. I loves that, as the story goes on, you get some of the details of the other times they have been drawn to one another, and of the reasons that it didn't work, and the reason why this time is different.

Stories where the hero and the heroine are trapped somewhere need a lot of elements in order for them to work, and this one works so well. Their past, the attraction, the fact that their previous encounters have all ended with one of them leaving (at least emotionally, often physically as well) all builds up into a wonderful romance with 2 people who are finally forced to stay in the same place. The conversation, the getting to know one another, that happens is so real, and so emotional, that you can't imagine them ending up anywhere but together.

I also think the story worked as there was no "great breakup scene" for them. Yes, there is the angst of the relationship, and the push and pull of figuring that out...but they do it together. And, there really is no other way for that to have happened after the closeness and openness of their night in the blizzard. I loved that Erin Nicholas didn't lose the momentum of the connection by staging the "big fight" that is so often a part of the developing relationship. Dillon and Kit had done enough of that, seeing them together, even if it was reluctantly on Kit's part, worked for the story and honestly, it is the main reason this was a 5 star read for me.

The other reason this one hit all the 5 star buttons for me is how much Dillon just plain loves Kit. These can be a hard sell, as you need the romantic hero to be a hero, to woo the woman, to be the male you want in a romance...and that can be tough when you start the book with the hero already in love with the heroine (even if she doesn't fully see it) but the way Nicholas writes Dillon, the way instead of forcing his love on Kit he shows her, with gloves, and s'mores, and blanket forts, and just generally caring about her, well, that works so well.

The romance is well balanced with the touches of life in a small town, with the disappointments of life in general, with the idea that sometimes, even when you are doing the right thing, and feel good about it, it is nice to have that push. That person there to challenge you, to come in (even if at the last minute) to shake up your world just a little bit.

And, while we are at it...my spelling bee nemesis word is "petition" and I have spelled that right since the 4th grade.

She felt her eyes widen. Because when he said stuff like that, her mind flooded with memories. How could it not? Something most people didn’t know about Chance’s very own superhero, Dr. Dillon, was that he was a dirty talker.

“You should not say stuff like that,” she admonished, taking the hat and gloves. “If we’re going to be living here and working together, we have to put all of that behind us.”

Dillon draped an arm over the steering wheel and twisted to face her. “Say stuff like what?”

His gaze grew mischievous, and Kit worked to control her thundering pulse as the impending sense of oh crap washed over her. Dillon was a big, smart, demanding, badass know-it-all. And that got her going. Despite her best intentions and all the self-talk she knew and taught patients. But when he got charming and playful, her resolve—and her panties—seemed to just dissolve.

It was very rare that he was anything but serious and bossy and determined. Which was probably why his fun-loving side was so potent.

“Why, Dr. Derby, I have no idea what you’re referring to. I meant that as a professional who needs to do a lot of writing and typing, you need all ten fingers to do your very important job for this town. What did you think I meant?”

She huffed out a breath and pulled on the hat and gloves. “Bullshit, Dr. Alexander,” she told him. Then decided that there was no reason not to be very direct and clear in her communication with him. That was what she would have advised a patient in her position, after all. “You were referring to liking things I’ve done with my hands . . . with you . . . in the past.” She faced him. “Like letting you lick hot fudge off them, and when you wanted me to touch myself, and, of course, the hand jobs.” 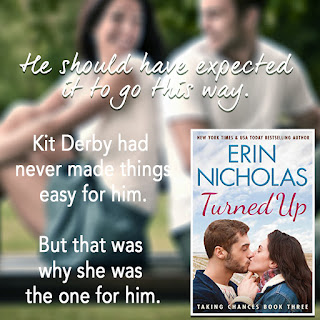 I've been reading romance since my mom first let me into her book cupboard when I was about fourteen. LaVyrle Spencer, Julie Garwood, Debbie Macomber... they took my 'happily ever after' ideas from animated princesses to real people in the real world.

I've been writing romance almost as long. Many a family car trip was spent with my head bent over a spiral notebook in the back seat. I'll confess that my very first attempts at fiction were fantasy and paranormals, influenced by my father's love of the Lord of the Rings, The Chronicles of Narnia, and the original Alice in Wonderland. If Harry Potter had been around, I'm sure he would have been on the bedtime story shelf as well.

But it wasn't long until I started writing about true love and that's where I've been ever since.

I'm so thrilled to be able to share these stories with you! I hope that they make you smile, sigh, maybe even choke up a little. Most of all, I hope that they help you believe in magical things like first kisses, the spark of passion, and the power of true love.