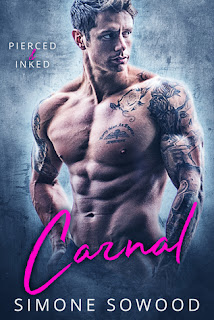 I don’t know what made me go to him that night.
Steel, the pierced drifter with the neck tattoo.
Mostly I wanted to hurt my reputation.
He could take my virginity and I’d go home, ruined.
I never thought he’d say no.

*** A steamy STANDALONE contemporary romance with a sizzling hot alpha. No cliffhanger, no cheating, and a guaranteed happily-ever-after. Please note Carnal was originally published as Carny, and has been re-edited.***

I liked this book overall.  I didn't actually read it the first time, as I was not sure how I felt about the idea of the hero being part of a traveling carnival.  I have no idea why, but this wasn't something that had a lot of appeal for me.  But, when it appeared the 2nd time, I thought I would give it a shot.

I liked Emily and Steel.  I liked their relationship.  While there was definitely insta-love, I also liked the idea that they were pulled from one another before they had a chance to fully pursue the idea of a relationship and what it might mean.  I think, at least for me, when a choice is taken from me, the appeal of the thing I lost becomes much stronger, so that part worked for me.

In places, I found the writing to be a little more dramatic than always works for me, but this is the author's style.  She writes the grand stories, the dramatic ones, in which the characters all react to things in a big way.  So, while this is not always a favorite of mine, I know this going into the book and I did not change the rating as a result of this.

That said, I thought Emily adjusted to the new life a little easily, but she was young and in the first stages of a new love, so I also thought that was realistic.  Sort of.  Although going from a Burberry dress to a trailer without AC and not really complaining was a bit of a stretch and I thought there was a lot of story there that was not really addressed.

I did think the whole thing with where he was from was a little much, and I thought it was not really a necessary thing...that there was enough going on for them, enough drama, that this was an addition that was not necessary for the story and that it took away from other points in the story that would have been better served to be a little more developed.

Overall, I did enjoy this, and it is exactly what is advertised, a fun, quick, hot read.