To save her family’s business, fledging CEO Daisy Cater must win the bid on a resort on St. Maarten. There’s a small catch, though. The seller insists all bidders visit the island and experience the singles retreat firsthand. This wouldn’t be so bad…if only rule-maker Daisy weren’t paired with her bitter rival, the hot and broody Alexander Gillard. Keeping her enemy close just became a whole lot harder.
Alexander “Zan” Gillard didn't expect to be partnered with gorgeous Daisy at the idyllic singles retreat. A challenge that has them cuffed together ignites an explosive chemistry, and soon Zan wants more than four days with this bewitching woman who is nothing like he expected her to be.
But their families are at odds and reality awaits them at home, along with a betrayal that threatens to blow their newfound trust apart...

Rivals to lovers is a newer trope to me, but one that I'm definitely becoming hooked on. When I saw this blurb I thought the book sounded fun, and I did enjoy it overall. This book was a quick, lighter read, even with the rival to lovers aspect of it.

I liked Daisy. I liked her following the rules, and her lists and seeing how flustered she got when those safety nets were taken away from her. I connected to her right away in the book and I sympathized with the position she had been put in. There were some moments where her actions made me chuckle as well. I enjoyed seeing her grow in the book and discover her true self.

Zan was a bit tougher for me. I didn't love him right away, it took him a while to grow on me. I know he was supposed to be tough, but I had a hard time at first seeing any redeeming qualities. He did possess some, it just took me a little longer to get into his head space. He definitely had the sexy down so that was good.

My problem with this book was that I felt like I missed something in the very beginning. I knew that these two were enemies but I didn't feel I got enough of their history to justify why. The reader is told the reason in a couple sentences, but I felt like I needed a bit more from them to understand exactly why this hatred went so deep initially. Do we get this information later? Yes, but again, the snippets given in the beginning made it difficult for me to follow initially.

I did believe the chemistry between these two. The sexy times were, well, sexy. The partner challenges they were faced with were entertaining, but some seemed a bit far fetched. I liked them together and did root for them overall.

Taming the CEO was a fast read for me. It had me chuckling and there were a few moments I had to stop and fan myself. I would recommend this title and will try this author again. 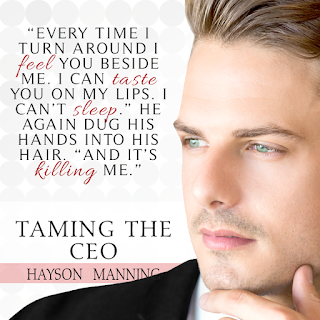 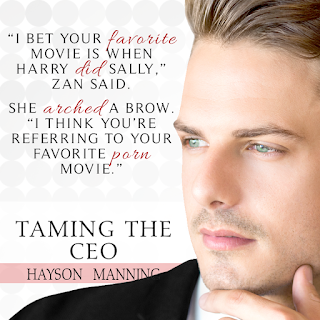 I love Princess Bride, Young and the Restless, Days of our Lives – the drama is deliciously addictive. Big Bang Theory but will take Wolowitz over Cooper. Star Trek not Star Wars. Undercover Boss, Secret Millionaire – any story that shows the little guy making it. I follow the Buffalo Bills like a religion. I am spellbound by showjumping and equestrian eventing. I love curling up and reading all books – no genre is off-topic. I like ironing, I hate peas, love donkeys, I play a killer game of Scrabble. I will often be heading towards the fridge for another Diet Coke. I eat nothing with legs and believe wine goes with everything, oh and I’m an expert at finding new and inventive ways to avoid exercise. I live in the sparkly beachside suburb of Redondo Beach in California with my infuriating shoe-dropping husband and my two boys who speak in mystifying grunts.
Connect: Site | Facebook | Twitter | Goodreads

a Rafflecopter giveaway
Posted by M at 9:45 AM