Today we are celebrating the release of OFFICE MATE by Katie Ashley. This is a standalone, contemporary romance title. Check out the blurb and buy links below!

From the first time I played army as a kid, the military has been my life. As an Airborne Major, I’d led my men through two tours in Afghanistan. But when my father was elected president, I became an even greater target for the enemy—a prize for someone to take out. To ensure not only the safety of myself, but of my men, I got stripped of my cammies, shoved into an Armani suit, and placed into a management position at my father’s company. After years of trekking through the desert with an assault rifle, I was way out of my area of expertise, which my transition coordinator was more than happy to let me know on a daily, if not hourly basis. The brunette bombshell would be the death of me in more ways than one, especially since I hadn’t been with a woman since my last deployment. She’s turning out to be one of the greatest foes I’ve ever done battle with.

In the backwoods Georgia town I was born in, you either married right out of high school or got the hell out of town. I chose the second and never looked back. After graduating top in my class, I started working for The Callahan Corporation. Fast forward five years and I was about to become the youngest female manager in the history of my department. And then all the blood, sweat, and tears I’d put into my career were for nothing when the boss’s billionaire son was handed my position on a silver platter. Not only that, I was expected to help transition him into the job that was supposed to be mine. Sure, he’s easy on the eyes with his chiseled good-looks and impossibly built physique, but I’m not going to let that distract me. I hope soldier boy is good at military strategy because sabotage is the name of the game I’ll be playing.

PURCHASE NOW OR READ FOR FREE IN KINDLEUNLIMITED!

Isabel was a bit of a tough nut for me to crack. I wanted to like her more than I actually wound up liking her. I sympathized with her position, 100%. I just didn't love her reaction and actions to Thorn coming in to the picture. So I was frustrated with her at times and just wanted to like her a bit more. She was smart and when I warmed up to her, she was likable. But there was just something that held me back from connecting fully to her.

Thorn on the other hand? I adored. He was sexy and strong and a heck of a good book boyfriend. I really fell for him right from the start. He's stuck in a spot he doesn't want to be in but does what he thinks is best for his team-who wouldn't fall for a man like that?

These two had a connection from the moment they met honestly. I enjoyed watching them figure each other out, mostly. Their sexy times were definitely sexy and hot. I do feel they had a good balance to one another in the end.

The plot of this book was different for me, and I mean that in a good way. The writing flowed and the pacing was good. Overall, I enjoyed this title and would recommend it.

I enjoyed this book. And I didn't. Really, in equal parts. Let me sum up,and then I will get into it more...I like enemies to lovers, possibly even more than friends to lovers. I like things set in the political arena, even on the periphery. What I don't like are books where there is an element of revenge or pranks played that could actually cause harm. That's a big no for me.

As this is an enemies to lovers, it takes a while for the romance between Thorn and Isabel to make it's appearance. Once it does, I really enjoyed this title. Well, once they realize that maybe they can be friends, and that there is an attraction that goes both directions, even though both have been reluctant to act on it.

That said, I struggled up to this point. I get it, Thorn took the promotion Isabel wanted, and was all but promised. And, he got the position because it's a family company, not because he put in the work to get himself there...so there is some anger, some resentment and some sabotage. Which, honestly, isn't my favorite subplot. When the sabotage becomes cruel, I sort of check out. And, in this case, it wasn't warranted. Thorn didn't want to be in the position at the company. He didn't ask for it. In fact, he's a soldier with a life plan of staying in the military. Until he is forced to leave...not due to injury, but because his father is elected President of the United States. So, yeah, he took Isabel's coveted position, but there is (at least in my opinion) no credit really given for that by her, until the end. So, for me, I struggled with liking her, as, well, her actions come across as someone who is behaving like an immature bitch who didn't get her way. So, yeah, I struggled with liking her.

Thron, however, I liked a lot...and I trust his judgment of Isabel. He sees something there, so I was able to give her the benefit of the doubt and remain invested in the story.

I did enjoy this overall, and I do recommend this title. 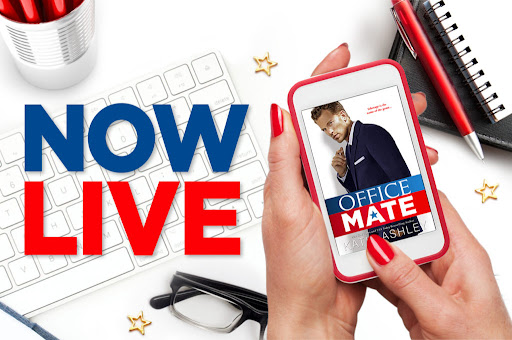 Katie Ashley is a New York Times, USA Today, and Amazon Best-Selling author of both Indie and Traditionally published books. She lives outside of Atlanta, Georgia with her daughter, Olivia, and her spoiled mutt, Duke. She has a slight obsession with Pinterest, The Golden Girls, Shakespeare, Harry Potter, Star Wars, and Scooby-Doo. With a BA in English, a BS in Secondary English Education, and a Masters in Adolescent English Education, she spent eleven years teaching both middle and high school English, as well as a few adjunct college English classes. As of January 2013, she hung up her red pen and expo markers to become a full-time writer. Each and every day she counts her blessings to be able to do her dream job. Although her roots are firmly planted in the red Georgia clay, she loves traveling the country and world to meet readers and hang out with fellow authors. When she’s not writing or chasing down her toddler, you might find her watching reruns of The Golden Girls, reading historical biographies, along with romance novels, or spending way too much time on Facebook.