She’ll prove she’s as good as she says she is.

He’ll prove her place isn’t under the hood.

“Don’t let the bastards get you down.”

For twenty-six years, I lived by my daddy’s motto. Which is why “Mechanic Wanted” is all it takes for me to apply for the job at the garage we once owned.

And I meet the biggest bastard of them all.

Dexter Ryne. Hotter than Hell in July and a firm believer that my place is on reception, taking phone calls and looking pretty. Not getting dirty under the hood of a car.

Determined to prove each other wrong, we make a deal.

I have three weeks to prove my worth as a mechanic. If I don’t, I’m on telephone duty.

If I do, he’ll accept defeat and make my job permanent.

Now, all I have to do is fight my attraction to the cocky little… beep.

Problem is, an engine isn’t the only thing he knows how to make purr…

I love Emma Hart, truly. Books like this remind me why she is a one click author for me. The moment I saw this blurb I knew I HAD to read this book. It sounded smart, sassy and fun-and it definitely delivered on all three of those things. Add in some heat and sexy times and I was hooked.

I'll admit, I know nothing about cars. I know nothing about mechanical issues...but that's ok, because Jamie does. She's confident in her abilities (as she should be) and she knows what she wants to be doing. Her determination really comes through in this book. I love that she is feisty, sassy and strong.

I was intrigued at how Dex was going to be portrayed honestly. It's hard to like someone if they're wary about others for no good reason. That isn't the case here. Is he thrilled about Jamie working for him? No. Does he have issues with her being a woman? Yes. But the author explains his feelings in a way that you get it and don't get annoyed with him because of it. That's a tricky thing to balance. This author writes hot, sexy, strong men and Dex was certainly all of those things.

The banter in this book just zings off the pages. The chemistry is there with the characters and I fully believed it. They had me chuckling and sighing, occasionally shaking my head. I could see their potential and was rooting for them the whole way through. The sexy times were hot enough to melt my kindle in spots-good thing I have a back up just in case.

This book was a fun read for me. The pacing worked for me, the writing was strong as always. The supporting characters were fun and didn't overshadow Jamie and Dex at all. I truly enjoyed this book and highly recommend it.

Gender bend romances open up the idea that the woman, or the man, in the story is going to be in a position in life that is uncommon for their gender.

In this case, Jamie is a female mechanic and Dexter (Dex) is the owner (well, he is in charge of the day to day operations) of the shop that used to belong to her family. When Jamie first meets Dex, he is surprised she is a woman and he really doesn't want to hire her in the shop. Yes, it is because she is a woman, but Emma Hart handles this in such a way as you don't think that it is that Dex thinks she isn't smart enough to do the job, but rather that, in his experience, a woman is not serious enough about being a mechanic to work in the "back of the shop" and this makes him reluctant to hire her.

I liked that Dex isn't a "women can't handle it because they are women" kind of man, that he has issues (one woman in the back of the shop couldn't lift a tire) that he has witnessed that have made him concerned. And, this is a fine line...but it works. If he is concerned about reality (women are not always as physically strong as men) and not that she is a woman, then this becomes an issue. I know this is a lot about this, but it really speaks to the strength of the writing of this title, that Emma Hart takes a topic that could get mired down in stereotypes and handles it not only realistically but in a way that doesn't detract from the personality of either character.

Now that the serious parts are out of the way, we can talk about the romance, and the heat, the attraction and the humor of the relationship with Dex and Jamie. I love that they argue, that they spar and challenge one another...to the very end. It works for them, and really it is foreplay.

The book is funny, and it is light and quick paced overall, but there is enough seriousness in it that you feel there is a story between the sparring, the heated glances, and the sex. I did want a little more of the resolution in the story and not moved into the epilogue, but this did not detract from the story, it is just a preference of mine.

I recommend this book, I enjoyed it, it was sexy and fun...while giving just the smallest underlying message that women shouldn't be written off just because they are women in a traditionally male job.

“Can I help you?” I asked. He blinked and met my eyes. “What the hell are you doing over there?” I pushed to stand up straight. “Right now?” He capped his water bottle. “Well, honestly… I’m just thinking you’d look better over the hood of that car than under it.” I unhooked the hood and slammed it down, spinning on the balls of my feet. Our eyes met properly. I didn’t like what I saw in his—desire, attraction, need. Which was obviously why a shiver ran down my spine. I cocked a hip, putting my hand on it. “The only time you will ever get me over a hood of a car is if a wiper blade needs changing. So, unless you’re a wiper blade...” Dex pulled his phone from his pocket and started tapping the screen. I blinked. “What are you doing?” He peered up at me through his unfairly thick eyelashes. “Seeing if I can get a wiper blade costume for Halloween.” “I don’t even know how to respond to that.” “You can buy wiper blade glasses.” “What?” He raised his eyebrows. “And a lady here on eBay will hand-make any costume. There’s my Halloween sorted.” I stared at him. “You’re not getting me over anything, Dex. Definitely not a car hood. No matter what you think.” He clutched his chest dramatically. “You wound me.” “Unfortunately not fatally,” I muttered. “You also underestimate me.” “There’s a lot of that going around in this garage.” I put the bottle of coolant away. “Touché.” “Thank you.” “Can I ask you something?” I sighed and turned to face him again. “What?” Earnestly, he asked, “Can you stop wearing those tiny shorts? Or yoga pants that make me want to touch your ass every five minutes?” I looked down at the ripped shorts of my dungarees. “Can you keep your thoughts to yourself? Control yourself, maybe? Not look at me and see someone worth screwing?” 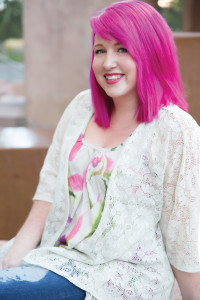 By day, New York Times and USA Today bestselling New Adult author Emma Hart dons a cape and calls herself Super Mum to two beautiful little monsters. By night, she drops the cape, pours a glass of whatever she fancies—usually wine—and writes books. Emma is working on Top Secret projects she will share with her followers and fans at every available opportunity. Naturally, all Top Secret projects involve a dashingly hot guy who likes to forget to wear a shirt, a sprinkling (or several) of hold-onto-your-panties hot scenes, and a whole lotta love. She likes to be busy—unless busy involves doing the dishes, but that seems to be when all the ideas come to life.

Choices. Everyone makes them. From mundane to unimaginable, one choice can change the trajectory of your entire life.  My mother’s choice w...