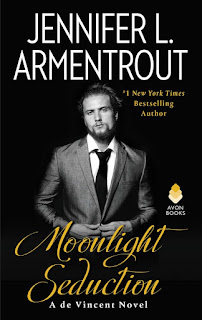 Nicolette Bresson never thought she’d return to the de Vincents’ bayou compound. It’s where her parents work, where Nikki grew up... and where she got her heart broken by Gabriel de Vincent himself. Yet here she is, filling in for her sick mother. Avoiding Gabe should be easy, especially when so much of Nikki’s time is spent trying not to be stabbed in the back by the malicious hangers-on who frequent the mansion. But escaping memories of Gabe, much less his smoking-hot presence, is harder than expected—especially since he seems determined to be in Nikki’s space as much as possible.

Gabriel spent years beating himself up over his last encounter with Nikki. He’d wanted her then, but for reasons that were bad for both of them. Things have now changed. Gabe sees more than a girl he’s known forever; he sees a smart, talented, and heartbreakingly beautiful woman... one who’s being stalked from the shadows. Now, Gabe will do anything to keep Nikki safe—and to stop the de Vincent curse from striking again.

Nicolette and Gabe were lovers years ago and as her parents worked for his family, it was a forbidden encounter and as Gabe is a lot older than Nikki, it's an encounter they have kept between them, telling no one and not giving their attraction a chance to become anything else..  But, it was one neither of them can manage to forget, even years later.

So, when Nikki comes back to the estate to assist with her parent's job by filling in for her mother while she is recovering, sparks fly...and both of them try to ignore them.  Until they realize that there is more between them than a liaison years ago, and that both of them are interested in seeing where the attraction will lead.

There is something about the de Vincent family...you know there is something off, something a little sinister...although you never really find out what...and it adds to the ambiance of the story.  It gives this forbidden romance a tension.  It makes you wonder what there is about the family that you don't know, and what secrets they are keeping.

All of this, the forbidden, the family mystery, the interactions with the characters all come together for an incredibly interesting story.

I recommend this title and I enjoyed it.