THE ONE YOU CAN'T FORGET BY RONI LOREN - ARC REVIEW 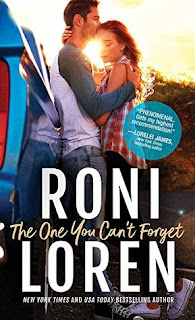 
The world admires her as a survivor. But that impression would crumble if people knew her secret. She didn't deserve to be the one who got away. But nothing can change the past, so she's thrown herself into her work. She can't dwell if she never slows down.

Wes Garrett is trying to get back on his feet after losing his dream restaurant, his money, and half his damn mind in a vicious divorce. But when he intervenes in a mugging and saves Rebecca―the attorney who helped his ex ruin him―his simple life gets complicated.

Their attraction is inconvenient and neither wants more than a fling. But when Rebecca's secret is put at risk, both discover they could lose everything, including what they never realized they needed: each other

She laughed and kissed him. This morning she'd melted down. But somehow this man had her laughing and turned on only a few hours later. Everything inside her felt buoyed.

This is the second book in a series that follows a group of people who went to school together, and who survived a school shooting. It deals with how they deal with it, whether they focus on it, or deny that it impacts their lives...and the ways in which their past shapes their lives.

Rebecca is the survivor, and she has put her life together and became a successful attorney. But in her drive, and her focus, to make sure her life means something, she also loses sight of nuance, and is unwilling to bend and see the other side of most situations.

Wes saves Rebecca from a mugging, and he doesn't recognize her as the attorney who represented his ex wife in their divorce. He's dealing with the damage, and is angry at the fact that the settlement wasn't exactly fair...but that the attorney in the case managed to suppress evidence of the truth.

Rebecca and Wes were compelling. Their connection was interesting, and watching them try to see how they worked, how they could get over their past, both hers and the one that they share, was interesting.

I enjoyed this title, and I enjoyed that, while it was focused on one of the survivors, it was removed from the high school world.

Buy This Book!
Amazon
Posted by Laura at 8:00 AM

Labels: ARC Review, Roni Loren, The One You Can't Forget