PROTECTING HIS INTERESTS BY SUZANNE ROCK-REVIEW 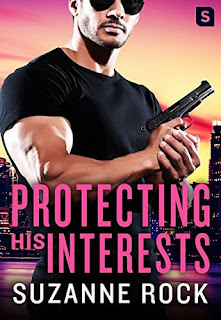 What if the roles in the movie Pretty Woman got switched?

After spending months undercover at a high-end escort service, Special Agent Gabriel Ferreira hits a dead end in his case. Then a gorgeous art restorer picks him as her date, and his luck changes in more ways than one.
Gabe won’t let Scarlett Bishop come between him and his goal of taking down Miami’s newest serial killer, no matter how great she is in bed. Unfortunately, the more he tries to distance himself from the sexy redhead, the more tangled up she becomes in his investigation. Now she has a target on her back, and he must figure out her connection to the killer and keep her safe at the same time. Every second he spends with the sarcastic beauty, he becomes more infatuated. Now if only he can keep his hands off of Scarlett’s gorgeous body and concentrate on his mission before they both become pawns in the killer’s dangerous game.

This was a little different than I was expecting from the blurb.  I enjoyed it, but I am not sure if I was totally on board with the idea that someone would order an escort, who happened to be an ex, to accompany her to a major event.  I think, for me, I would like to believe that a woman can be successful even if she doesn't have a date.  That said, it did work for the plot of the book and it was only their initial meeting that was a result of this, so I was mostly able to let this go.

I enjoyed this overall.  There were places I thought the pacing was a little unsteady and there were parts where I felt that it skipped a bit, but I enjoyed it overall.  And, in the areas where I thought it seemed a little fast, I can tell what the author was doing, and I think it was intentional.

I enjoyed this title overall, and I do recommend it.