THREE WEEKS WITH A PRINCESS BY VANESSA KELLY-VIRTUAL TOUR

each bound for her own thrilling adventure . . . 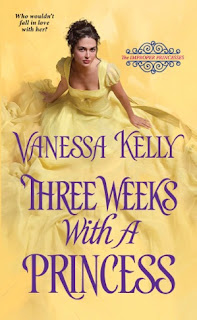 In Vanessa Kelly s captivating series, three young women are descended from royalty in the most improper way. But that doesn’t stop them from pursuing lives rich in adventure. . .

Lia Kincaid, illegitimate daughter of the Duke of York, comes from a long line of notorious women. Raised by her grandmother, formerly mistress to the late Marquess of Lendale, she has little hope of a respectable marriage. But the new Marquess, her childhood friend, Jack Easton, would make a very desirable protector . . . if he weren't too honorable to take her to bed.

It s bad enough being saddled with a title he never desired. Now Jack must resist the beautiful woman he desires far too much. Duty calls, and he is duty-bound to choose a wealthy bride. But then Lia makes another outrageous suggestion: asking Jack to devise some tests to find her the perfect paramour. Tests that involve flirting, kissing, and other pleasurable pursuits. Tests that, in a matter of weeks, could transform friendship into the ton s greatest scandal, igniting a passion even duty can t deny. . .

Lia and Jack grew up together.  Well, sort of.  He was the son of a nobleman, she the granddaughter and daughter of a courtesan and actress, so they were around one another, but there was always a separation, one that his mother definitely wanted to remain in place.

I liked the resolution of the situation with his mother, as I was worried this was going to be handled in a way I did not relate to...but no worries there, I believed the resolution.  I admit, I was worried the more we saw of Jack's mother, that I was not quite sure how this was going to work out.  And, I love it when the book (and the author) handle the issues they create for their characters in a way that feels authentic and realistic.

Historical romance is, by definition and necessity, a cleaner and often a sweeter romance.  The author is left with the task of moving the story without being able to rely on the physical chemistry.  This story was charming, and the attraction and friendship between Jack and Lia was wonderful.  You genuinely believe that he really does care about her, and how she feels.  And, the time he takes with her at the very beginning, in the prologue, gives you an idea of how drawn he is to her, even though it will be years until they actually start a relationship.

And, the reason she says she wants 3 weeks? Well, that is explained, it is wonderful and leaves the reader, and Jack, feeling like this was a match that has been destined from the beginning.

I definitely recommend this book. 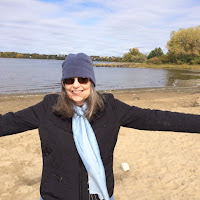 Vanessa Kelly is a USA Today Bestselling, award-winning author who was named by Booklist, the review journal of the American Library Association, as one of the “New Stars of Historical Romance.”  Her Regency-set historical romances have been nominated for awards in a number of contests, and her second book, Sex and The Single Earl, won the prestigious Maggie Medallion for Best Historical Romance.

Vanessa’s previous series, The Renegade Royals, was a national bestseller. She is currently writing a spin-off series called The Improper Princesses. My Fair Princess, book 1, was named a Goodreads Romance of the Month. Vanessa also writes USA Today Bestselling books with her husband, under the pen name of V.K. Sykes.