FOREVER YOURS BY ADDISON FOX-REVIEW 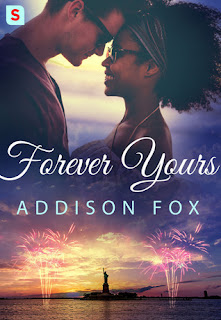 Addison Fox's Forever Yours is fun, flirty, and sure to set off plenty of fireworks in readers’ hearts.

Detective Cade Rossi has spent the majority of his life oblivious to Jasmine Shane. She’s always been his little sister’s best friend, but after coming to her rescue one night, Cade is starting to see the woman behind the lawyerly suits.

Since childhood, Jasmine has harbored an embarrassing crush on Cade. She’s seen him work his way through nearly every eligible bachelorette in Park Heights, Brooklyn, and Jasmine’s given up hope of them ever having a chance together.

But summer is the perfect time for a fling, and as Cade and Jasmine grow closer, what starts out as an innocent flirtation could turn into so much more…

I really liked the sound of this book, and I thought it had a lot of potential.

Unfortunately, it fell short for me and I ended up not really invested in the story.

I liked Cade and Jasmine, and I liked the idea of them finally getting together.  But, I thought the amount of time she had been pining for him (and the fact that all sorts of other people know how she feels but somehow he doesn't) just didn't work.

You find out at the beginning that Jasmine has loved Cade for 20 years.  And, he is clueless that she feels this way and is also dealing with the idea that he has feelings for her.  I wanted more exploration of this and, as this was a novella, it was already short on words to do this...but instead of going with this angle, the author decided there needed to be a catalyst to move them to being a couple...and this really messed up the authenticity of the story as well as the pacing.

I wanted to like this one, to really engage with the story, but I just didn't.  I also thought the details of them being together, the would it work questions, were glossed over because now they were both in love.  And, as this was a friends to lovers that also had an interracial element to it, and both of those were essentially ignored.  Which was a disappointment.

I wanted more from this title than I received.

I do not recommend this title.

Buy This Book
Amazon
Posted by Booked All Night - Laura at 3:00 PM