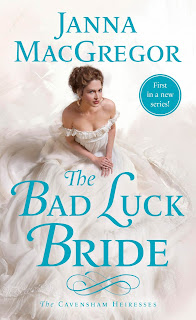 All were shocked at the announcement of the “cursed” Lady Claire Cavensham to Lord Alexander Hallworth, the Marquess of Pembrooke, especially since she is already engaged to another unfortunate Lord. Perhaps she will make it to the altar this time with one of these fine gentlemen! —Midnight Cryer

No one is left breathless at the imperious pronouncement of her engagement to Lord Pembrooke more than Claire. She hardly knows the dangerously outrageous man! But after three engagements gone awry and a fourth going up in glorious flames, she isn’t in a position to refuse...

Alexander requires the hand of his enemy’s fiancée in marriage in order to complete his plans for revenge. It’s his good fortune that the “cursed” woman is desperate. However, what begins as a sham turns into something scandalously deeper...

The Bad Luck Bride is the first in a new Regency romance series from Janna MacGregor!

I am not the biggest fan of books where the meet cute involves deception, so I had a little bit of a tough time getting into this book.

Alex and Lady Claire were interesting, and I really liked Claire.  Once I got past the initial dislike of Alex, I was able to engage with the story a little more, but that initial experience did color my overall opinion of the book.

For a debut novel, I thought this was fairly well written, although there were a couple of places that I thought the narrative dragged a little and that too much time was spent in a situation that was not totally pivotal to the book.  This time spent, in my opinion, in the wrong area left another area slightly unresolved at the end, which did feel like an issue in the plot of the story.  Not enough that I was unable to be satisfied at the end, but enough that I didn't totally feel that the entire narrative was resolved.

I did enjoy this overall, and I am interested in reading other titles by this author. 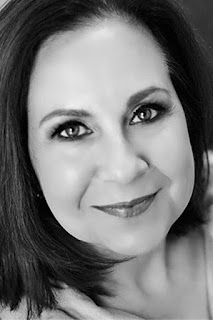 Janna MacGregor was born and raised in the bootheel of Missouri. She credits her darling mom for introducing her to the happily-ever-after world of romance novels. Janna writes stories where compelling and powerful heroines meet and fall in love with their equally matched heroes. She is the mother of triplets and lives in Kansas City with her very own dashing rogue, and two smug, but not surprisingly, perfect pugs. She loves to hear from readers. The Bad Luck Bride is her first novel.