LOVE ME AGAIN BY JACI BURTON-REVIEW 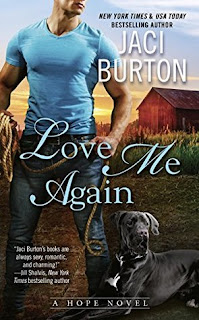 In the latest novel from the New York Times bestselling author of Don’t Let Go, it’s never too late for a second chance at first love…

When Loretta Simmons returns to Hope, Oklahoma, after a disastrous marriage, she’s determined to remain independent for the sake of her daughter. The only thing standing in her way is Deacon Fox—the man she loved and walked away from years ago.

Since Loretta owns the bookstore right next to his current renovation project, Deacon can’t escape the woman who broke his heart. Throw in her adorable little girl and one ridiculously oversized dog, and they’re almost a family. Only he can’t be that guy—what they had was once in a lifetime.

Second chance romances are some of my favorites.  There is a challenge for the author in balancing the reason that the couple broke up in the past with the idea that they can work things out in the future.  This hit the balance well.

Loretta and Deacon were high school sweethearts, and they split because, as teenagers do, Loretta listened to the advice of others and made decisions that she thought were going to be best for both their futures.  Fast forward a number of years and those choices didn't work out as well as anticipated and Loretta is back home, in Hope and working next to Deacon's current renovation project.  At first, neither is happy, but as they spend time together, and he bonds with Loretta's daughter, the attraction and emotion that was only slightly buried comes back to the surface.

I loved that the characters both worked through some of the issues with their past, that they came to the realization that they wanted to be together here, in the now and in the present, and that there was more than just the past with them.

This is the 7th in a series and while the book is definitely focused on Loretta and Deacon, there are snippets of other characters from previous stories which were fun.  You can definitely start with this book, and the other characters will be pleasant secondary characters, but if you have read the previous books, the little bits of time with them are a lot of fun.

Jaci Burton is a go to author for me, so a small town second chance romance, well, I knew I was going to be getting something good.  And I was not disappointed.

Buy This Book!
Amazon
Posted by Booked All Night - Laura at 11:00 AM