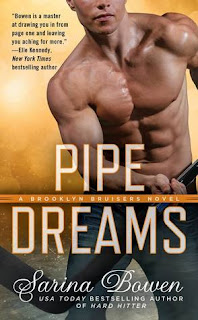 A goalie has to trust his instincts, even when taking a shot to the heart…

Mike Beacon is a champion at defending the net, but off the ice, he’s not so lucky. A widower and a single father, he’s never forgotten Lauren Williams, the ex who gave him the best year of his life. When Lauren reappears in the Bruisers office during the playoffs, Beacon sees his chance to make things right.

Lauren hates that she’s forced to travel with the team she used to work for and the man who broke her heart. There’s still undeniable sexual tension running between her and Mike, but she won’t go down that road again. She’s focused on her plans for the future—she doesn’t need a man to make her dreams of motherhood come true.

Lauren plays her best defensive game, but she’s no match for the dark-eyed goalie. When the field of play moves to Florida, things heat up on the beach.

One of Mike’s biggest fans doesn’t approve—his teenage daughter. But a true competitor knows not to waste the perfect shot at love.

Mike and Lauren have a history.  And, it is a painful one.  They were attracted, he was married, things happened, they got together and then they split up.  At least, that is the story she has, and the one that others were allowed to believe.  It is the reason Lauren really doesn't want to give him a second chance.  He is the reason she is no longer a part of the hockey world, and the reason she no longer works directly with a team, so there is a lot that she has done to make it to where she doesn't see him in her daily life.

There were a lot of things that worked.  The reason he had for ending them makes them being able to restart quickly make sense, especially as he starts to tell her what happened, and why, and what he was thinking when he made the decision.

This quick restart, however, is a bit complicated by the fact that Lauren has started the process of having a child on her own.

Not that the book was bad, not at all.  Mike loves Lauren.  You can tell this right off.  And, he doesn't try to hide it from anyone.  And, it is nice to read a book where the hero just plain loves the heroine.  Mike loves Lauren, it shows, and it was fun.