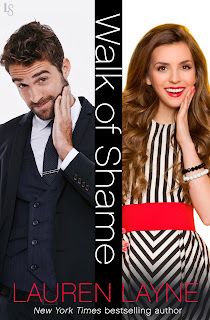 Sparks fly between a misunderstood New York socialite and a cynical divorce lawyer in this lively standalone rom-com from the USA Today bestselling author of Blurred Lines and Love Story.

Pampered heiress Georgianna Watkins has a party-girl image to maintain, but all the shopping and clubbing is starting to feel a little bit hollow—and a whole lot lonely. Though Georgie would never admit it, the highlights of her week are the mornings when she comes home at the same time as her uptight, workaholic neighbor is leaving to hit the gym and put in a long day at the office. Teasing him is the most fun Georgie’s had in years—and the fuel for all her naughtiest daydreams.

Celebrity divorce attorney Andrew Mulroney doesn’t have much time for women, especially spoiled tabloid princesses who spend more time on Page Six than at an actual job. Although Georgie’s drop-dead gorgeous, she’s also everything Andrew resents: the type of girl who inherited her penthouse instead of earning it. But after Andrew caps one of their predawn sparring sessions with a surprise kiss—a kiss that’s caught on camera—all of Manhattan is gossiping about whether they’re a real couple. And nobody’s more surprised than Andrew to find that the answer just might be yes.

Lauren Layne is a favorite of mine because of books exactly like this one.

Georgianna "Georgie" and Andrew are opposites. She comes across as a little flighty, maybe a little self absorbed and shallow. And, Andrew comes across as cold. This is a story about people learning about the other, and then learning that those first impressions do not tell the whole story.

This is a slow burn, there are parts with amazing chemistry, there is a scene where Andrew is so cruel to Georgie that your heart breaks for her...and then for him when you realize he didn't mean it the way he said it. Not at all.

There is a little bit of a twist/hurdle in the middle of this one, and I think it was a little predictable...but at the same time, sometimes in a book an event is predictable because the author has laid the correct groundwork to lead up to it that when it happens, you are not at all surprised. This is what happens in this one, and the resolution of it really gives Andrew and Georgie a chance to shine as the new people they have become throughout the story.

At this point, I would read Lauren Layne's grocery list. But instead of that list, she keeps giving us books like this one. And, readers everywhere are better for it.

This is a standalone, so if you are reading this review and have never read her work, start here. You won't be disappointed.

I've been a fan of Lauren Layne since I discovered her books last year-and binge read them all in a week. Since then I've patiently (ok, not so patiently) awaited each new release, ready to dive in to the author's unique storytelling ways. I've enjoyed all of her books but this one had a little something extra to me and it is hands down my favorite Lauren Layne book.

Georgianna was such a fun, different character. I could relate to her always finding the bright side, for always believing in happily ever afters (thanks, Disney) and just her bubbly personality overall. Georgie is so much more than the party girl she's initially made out to be. She's smart, kind and funny. I just loved her.

Andrew-oh, Andrew. I fell for him hard and fast. Like Georgie, I wanted to see his smile, hear him laugh. I wanted to peel back his layers until I found out what made him tick. What I found when his layers were exposed was a sweet, shy, somewhat socially awkward man that I just couldn't help loving. He definitely is at the top of my book boyfriend list.

The dialog between these two characters is sharp and witty. Each little subtle dig exposed them more to each other. I loved feeling the chemistry between them, watching them finally figure out what they really wanted from each other and deciding whether or not it was worth it.

Lauren Layne has a way of creating such a community within her books that you can't help but feel you could be a secondary character. I felt like I could be friends with Georgie and her crew, that I could walk down the streets of NYC and find them in a club and they'd just welcome me in. At the same time, I feel I could work with Andrew as well. Theirs is a world I wanted to live in.

I devoured this book in one sitting. It appeared on my kindle and everything else on my TBR list got pushed back a bit-and it was absolutely worth it. This is a book I'll read over and over. It made me laugh, had me swooning and had heat to boot. Lauren Layne has knocked it out of the park with Walk of Shame. I highly recommend this book.

I know this because we moved into the building on the exact same day, and right before we got into a horrendous fight over whose movers should have access to the building loading dock first, he handed me his business card.

The thick white card stock declared that he had a fancy law degree to go along with the fancy suit he was wearing on a Saturday.

Andrew handed it over with such superiority, I actually wished for a half second that I had a business card of my own that would somehow be better than his. Like, lined with gold or something. No, platinum. With a diamond in the corner. It would be too heavy for him to hold, and he’d drop it, thus having to kneel at my feet to pick it up.

But then I realized it was just as well that I didn’t have a business card.

Because it would say . . . what? Georgie Watkins, professional party girl?

Anyway, I digress. Despite the high temps of that swampy July morning, the encounter had been the start of an epic cold war.

I’m not entirely sure I’m winning the war, but I’ll never tell him that.

I let my gaze drift over Andrew, even though his appearance rarely holds any surprises. The man’s a lesson in sameness, like some sort of anal-retentive version of Groundhog Day.

There’s always the black mug with some healthy gunk inside held in his right hand, Tom Ford briefcase and Armani garment bag in his left, containing what I know to be a perfectly tailored three-piece suit.

Andrew’s coppery hair is perfectly styled, although I’d swear that there’s some natural curl in there threatening to disrupt his perfect order. I imagine that annoys him, so it therefore makes me happy.

Let’s see, what else about my nemesis?

I suppose you could say he changes up his attire, because he does alternate between black and gray gym shirts. But considering that they seem to be the exact same fit, both colors molding perfectly to his impressively sculpted upper body, we’re not giving him any points for variety there.

Same goes for the lower half. The black shorts worn in summer have given way to sleek black sweatpants now that October’s upon us, but they’re both black and Nike, so we’ll give him no credit for changing it up there either.

I do a double take.

Instead of the usual black gym shoes, the man’s shoes are red. I don’t know how I missed it before.

I drag my eyes back up his body with a grin, and he gives just the slightest roll of his eyes to indicate that he’s noticed my slow perusal and isn’t fazed in the least.

Of course not. Far too frivolous.

“No, that makes sense,” I say, pointing at his feet. “Glinda would have given these to you.”

Andrew looks down at his Rolex watch. “I’ve got to go. Have a good day, Mr. Ramirez.”

“You too, Mr. Mulroney,” Ramon says with a deferential nod. “Enjoy your workout.”

“Yes, do,” I say, turning and watching as Andrew moves toward the front door of our building. “What’s on the schedule today? Treadmill, or just skipping down the Yellow Brick Road?”

Andrew Mulroney, Esquire, doesn’t respond. He doesn’t even turn before pushing through the revolving doors and stepping out into the still-dark autumn morning.

Now come on. Tell me that wasn’t at least a little bit fun, despite the ungodly hour.