THE THING ABOUT LOVE BY JULIE JAMES-RELEASE DAY BLITZ 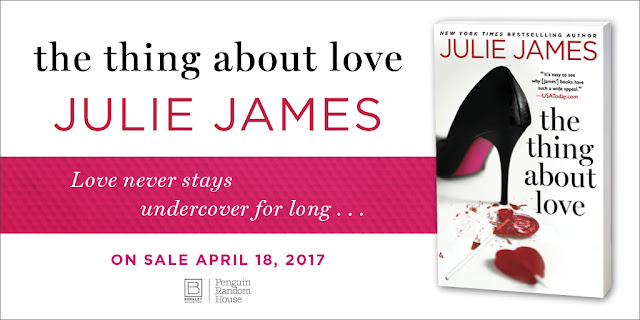 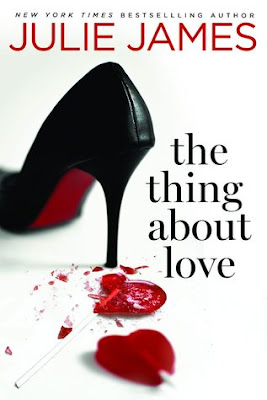 Two undercover FBI agents can hide who they are from everyone but each other in the latest novel from the New York Times bestselling author of Suddenly One Summer. FBI agents Jessica Harlow and John Shepherd have a past. The former lawyer and cocky Army ranger clashed during their training at Quantico, gladly going their separate ways after graduating from the Academy. Six years later, the last thing either of them expects is to run into each other again–assigned to work as partners in a high-profile undercover sting.

For both of them, being paired with a former rival couldn’t come at a worse time. Recently divorced from a Hollywood producer and looking for a fresh start, Jessica is eager to prove herself at her new field office. And John is just one case away from his dream assignment to the FBI’s elite Hostage Rescue Team. In order to nail a corrupt Florida politician, they’ll have to find a way to work as a team–a task that becomes even trickier when they’re forced to hole up at a romantic, beachfront resort as part of the investigation. Suddenly, the heat behind their nonstop sparring threatens to make the job a whole lot more complicated. . .

Julie James is a favorite of mine, and books like this one remind me why.  I was up late reading it, I was not going to put it down, and each time I thought that I would be able to set it aside and finish the next day, something else happened that drew me in to the story on the pages.  And, I kept reading.

Jessica and John were amazing together.  Their chemistry was explosive, the connection was palpable.  You immediately see that Jessica really thought there was animosity between them, but from his actions, you can tell that John was attracted to her from the start and just didn't quite manage to convey that to her.  The "her side" and "his side" chapters also help the reader end up there with them.

I loved the way their past was handled, letting the reader explore their 6 years ago history while they talked and reevaluated a lot of the opinions they had of one another from their previous time together.  I liked this evolution of their story.  Part of making an enemies to lovers story work is the reader believing the change in their feelings toward one another.  In this case, the open discussion of what was meant and how it was interpreted works very well to close the gap between enemies and lovers.

The angst in this book as it gets closer to John leaving for his dream assignment is the kind that keeps you up late at night, because you just have to know how it is resolved and how they will work it out.  And, this is a challenge for a romance author.  It is part of the deal going into a romance that the reader, and the characters, are going to get their happy ending.  It's expected, it is part of the genre.  So, when an author manages to build the emotion and the angst into the HEA, you notice as a reader as this is tough to do.

So, you ask, why the 4.5?  Honestly, I struggled with this as I LOVED 98% of this book.  It was headed to my list of all time favorites.  But, then it hit a small snag...I am not totally able to believe that Jessica and John would be together if not for the actions of an outside force.  They love each other, and you know this, so I think they probably would have ended up there, in order for me to really love everything about a book, I need it to be the actions of the couple themselves who bring them back together.  So, in that one little area, toward the end of an otherwise perfect book, there was a little hurdle for me.

I do still recommend this book.  It was so good, it will keep you up at night, like it did me, just wanting to see how it ends, how they work it out.  And, I am guessing the majority of you will be thinking it is your latest 5 star read. 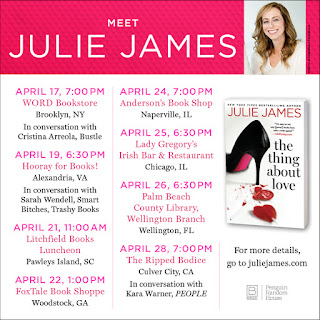 Steeling himself, John turned around and smiled as Jessica approached. “Yes, Agent Harlow. How can I be of service?”
In response to his dry tone, she threw him a glare so cold it could’ve frozen all nine circles of Dante’s Hell. Fittingly, just nine of the many places he would rather be than stuck working with her on this investigation.
“Look, I’m not thrilled about this, either.” Keeping her voice low, she came to a stop next to him at the elevator bank. “I thought you were supposed to be on the Hostage Rescue Team already.”
“And I thought you were supposed to be in L.A.”
There was a quick flash in her eyes before she shrugged off his question. “Change of plans.”
The elevator arrived at their floor, and they both stepped inside. She hit the button for the seventh floor, where the public corruption squad was located. Standing on the opposite side, he pressed the button for floor five.
They faced off as the doors shut. She folded her arms across her chest and studied him with those crystalline blue eyes that could so cleverly mask her emotions.
As he knew well.
“We’re going to have to figure this out,” she said. “We’re supposed to be business partners in this.”
Thank you, yes, being a professional, he was aware of that. He took a step closer. “It’s called “undercover” work, Harlow. If I can pretend to be a gun-buying, murder-for-hire thug, I think I can handle playing some rich investor-type who wants to skirt a few measly zoning laws.” Even a rich investor-type who was apparently masochistic enough to get in bed with the likes of her.
Professionally-speaking.
“Measly zoning laws?” she repeated.
Ooh, now he’d gone and pissed her off. How nice it was, really, that they could pick up like this, right where they’d left off.
She drew in closer, tilting her head back to meet his gaze. He was over a foot taller than her, although he noticed that she was heightening a bit with those expensive-looking three-inch heels she wore.
“Our target in this investigation is the mayor of the thirteenth largest city in the United States. That’s a pretty big deal in my book.” She gestured to his facial scruff and hair. “And while I appreciate that this . . . Sons of Anarchy motif you’ve got going might ingratiate yourself with the gun-buying, murder-for-hire, organized-crime thugs of the world, that’s not quite going to fly with this sting operation.”
“’Thirteenth largest city in the United States?’” he scoffed. “Just how many hours did you spend reviewing the case files last night?”
She smiled sweetly as the elevator arrived at her floor. “Enough to get the jump on you.”
Then the doors sprang open, and she gave him a friendly wave, once again stepping into the role of Ms. Congeniality. “So glad we got to catch up like this, Agent Shepherd. We’ll talk again soon.”
He watched her stride confidently down the hallway as the elevator doors closed between them.
Enough to get the jump on you.
Not for long, sweetheart.
Time for him to get cracking on that case file.

Amazon
Barnes & Noble
Kobo
Posted by Booked All Night - Laura at 11:00 AM