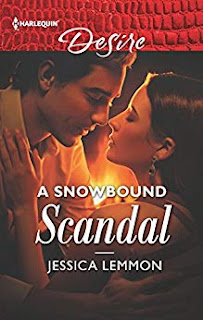 As the snow falls, her touch sets him aflame…

Texas billionaire Chase Ferguson has one regret: leaving Miriam Andrix to protect her from his public life. When a snowstorm strands her in his mountain mansion, their passion reignites, and it’s too hot to resist! But reality—and scandal—arrives with the thaw. Chase turned his back on happiness once. Will he fight for what he truly wants this time?

I am not sure why, but in this one I struggled a bit liking Chase. This is odd for me, as I generally love Jessica Lemmon's characters, even the complete asshole men that she occasionally writes (looking at you here, Eli) and the redemption story as they fall in love with the perfect woman. Chase wasn't even really a jerk...yes, a little controlling with a bit of a habit of telling others what to do (for their own good, of course) and a little bit of the type to make decisions for others, but all in all, not a bad guy. And, he did grow on me by the end.

So, I am still not sure what it was about him that I didn't totally connect with. Although, I can say I really liked him by the end and completely understood why Miriam decided that a life with him was absolutely worth dealing with the fact that he is the major of Dallas.

I know Ms. Lemmon has said that she loves a forced proximity story, and it shows as it is well crafted and the reason that they are stuck together ( a combination of weather and stubbornness) works well and allowed me to believe that these 2 people would be in the situation, that they were going to be forced to put up with one another, and it was going to turn steamy.

I also liked the ending, the little bit of the life he leads sneaking into their idyllic world. For me, that is the challenge in a book like this, I want to know when they are freed from the cabin, the snowplows show up, that the relationship is going to be strong enough to continue to work when they are no longer forced to be in the same place. And, adding in the outside world allowed me to believe this is more than a weekend fling.

BUY THIS BOOK!
Amazon
Posted by Booked All Night - Laura at 9:00 AM