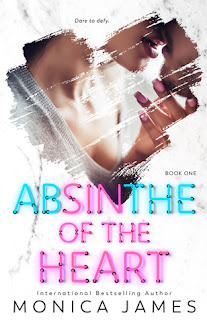 Two households, unlike in dignity, in the City of Angels is where we lay our scene...

London Sinclair was the boy my mother warned me about for as long as I can remember. His name alone has brought my family nothing but shame and suffering, so it’s no surprise we’ve been sworn enemies since the first moment we met.

With his bedroom eyes and cocky smile, he has all the girls under his spell. I have one more year of school left, and then I’m home free because I’m guarding a secret, one I’m ashamed to keep.

The boy who is completely off-limits is the one who drives me, Holland Brooks, wild. I want London, and I think…he wants me, too.

Some may compare it to a Shakespearian tragedy, as our surnames have fated our future, but when a single night changes my life forever, I can’t leave the City of Angels fast enough.

Ten years later, I have atoned for my sins and return to Los Angeles a changed woman. I’ve come home to get married. But the moment London walks back into my life, one thing is clear. Ten years can’t undo that night—that single, sinful night when I gave into temptation—because I want to do it again.

GAH!! Such a place for a cliffhanger.  You see it coming, the way the story unfolds you suspect...but at the same time, it is such a shock that it actually ended here, and that the author took the characters to this point before telling us it is to be continued.

Landon and Holland were enemies, and then they were lovers and then they were nothing as life moves on and they grow past high school and the slings and arrows of adolescence and family obligations and expectations.  The passion and the attraction they have for one another is, I think, partly fueled by the forbidden of the relationship between them and the family feud that extends from their parents to them.

This is one of those books, however, that can easily be spoiled with too much info about the plot in the review, and that would ruin it for everyone...so I am going to leave this here and I am going to say that I enjoyed this, and I am looking forward to the next in the duet...and I can't wait to see where it goes next! 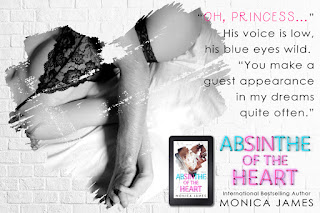 Labels: Absinthe of the Heart, Monica James, Review by Laura