STAY WITH ME BY JULES BENNETT - ARC REVIEW 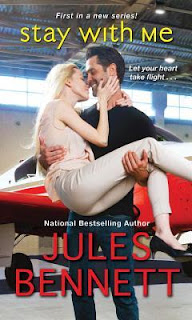 Small-town Haven, Georgia, is home to generations of families, plenty of Southern charm, and an airport that's seen better days. But as three friends are about to discover, love gives everything wings . . .
At eighteen, Olivia Daniels left Haven behind and never looked back. Doggedly climbing the corporate ladder, she's finally nearing the top when her father dies--leaving her part-owner of the run-down airport that was his first love. It's a complication Olivia intends to wrap up quickly--buying out her co-owner and selling the land. Good thing her childhood best friends are with her for moral support. Because one look at her new partner is proof that her tidy plan has hit turbulence . . .

Jackson Morgan practically grew up in Haven's airport, and no one could have been a better mentor than Olivia's dad. Flight is in Jackson's blood, but his roots are firmly planted, and there's no way he's giving up the airport--not even for sassy, headstrong Olivia, his childhood crush. Coming to an agreement won't be easy, especially when the attraction between them soars to new heights every day. Love definitely wasn't on the itinerary, but is it enough to keep them together for a lifetime trip? . . .

Olivia and Jackson have very different ideas about how the airport in Haven should be maintained, how much they want to do with it, and how interested they are in keeping it in their lives.

Which wouldn't usually be an issue.  Unfortunately for them, they each own 50% of it, and they are going to have to figure out a way to get along and work out their issues with one another to figure out how to deal with the airport.

I enjoyed this title.  I liked their connection. I liked that there was a genuine enjoyment of one another, and a genuine like of the other person (although they both tried to hide and fight against that) and I liked that Jax respected Olivia and the career she thought she wanted, enough to never belittle her for choosing it and not her hometown and the life they could share there.

I enjoy Jules Bennet's stories as they are always full of characters you like, and want to get to know better.  This was no different.  I liked the main characters, and I also liked the ones you meet as secondary characters and it is clear that those characters will be getting their own books in the series.

The only issue I had was that the child is 4, but seemed a lot older for her age and I was not totally sure I believed everything she said, and the way she handled situations.  But, that said, it was not enough of an issue for me to be unable to enjoy the story.

I enjoyed Jax and Olivia and I am looking forward to the next in the series.

Buy This Book!
Amazon
Posted by Booked All Night - Laura at 12:00 PM