Willow Haven’s content. Okay, that’s a lie, but she has tried her damndest. Trouble is, it never sticks. Second oldest in a family her town was named after, she’s always felt the pressure. From the townspeople, from her sisters, but most of all from her daddy—the original Good Old Boy and Havenbrook’s reigning mayor. The only time she didn’t feel that stress had been those blissful months spent in the arms of the resident bad boy. The same one who broke her heart beyond repair when he left without a word.

Life hasn’t come easy for Finn Thomas. He’s had to claw and fight for everything he’s ever had—and truth be told, it hasn’t been much. He spent the first eighteen years of his life living so far from the wrong side of the tracks, he couldn’t even see them through his trailer window. The only thing that ever came easy for him and made his sorry ass happy was the one girl he loved with all his heart. And the one thing he had no choice but to leave behind.

When an opportunity arises to return to his tiny, southern hometown and open the first bar in a formerly dry county, he jumps at the chance. That won’t win him points with the mayor, who’s hell bent on making Finn’s life a nightmare for sullying his namesake. Too bad for Mayor Haven, Finn’s got his sights set on more than just the town, and this time he won’t be scared off quite so easily.

I enjoyed the story of Finn and Willow reconnecting and finding the happy that had been taken from them. There was enough info about their past to understand the connection without it dragging the story into one that was dwelling in the past.

A second chance romance, to work, needs the reason to be compelling enough that you believe it, but not quite bad enough that you can't forgive it...and this title struck that balance well. I believed that a 19 year old young man would make the choices he did, and that an almost 30 year old man would regret and want to change them.

There were times where the inner dialogue felt repetitive, like I had heard the same thing from the character before. This can work if they are working through something, but I felt that the author spent a lot of time reminding the reader that there was an attraction between them.

However, I did enjoy this overall. I liked the writing and I liked the "Southern" that was added into the speech and the customs. It felt authentic, and it gave a realism to the story that worked well.

I recommend this title and look forward to the next in the series. 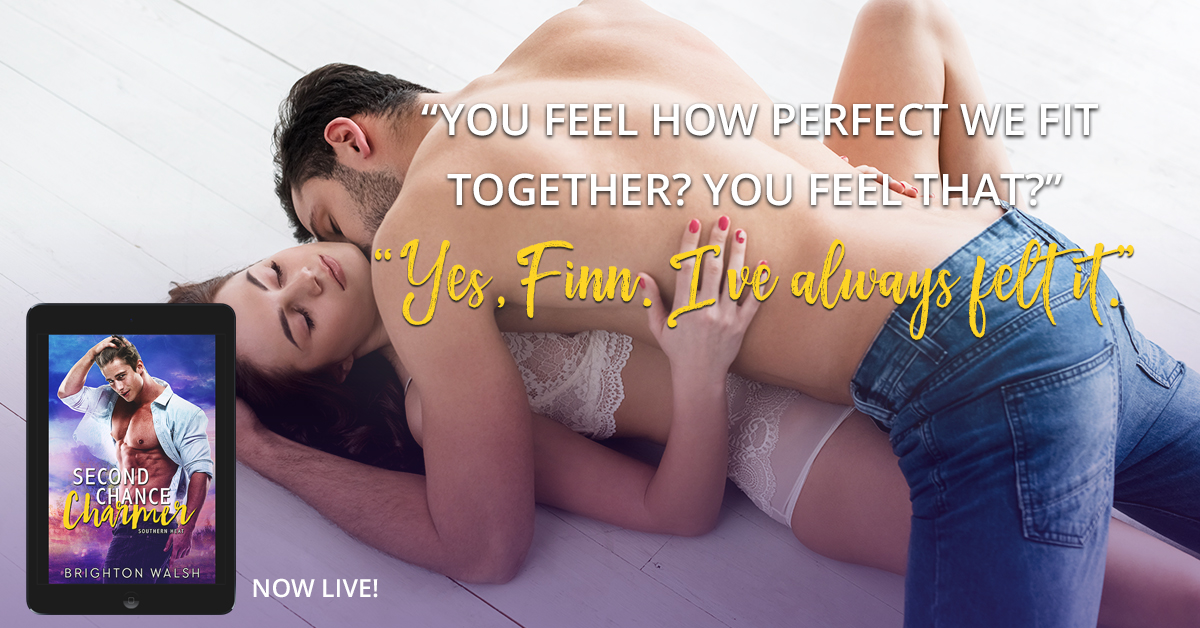 Without any conscious thought, Willow’s fingers started tracing the lines of ink on Finn’s skin, and all she could do was watch. He was so solid and warm under her fingertips, his puffs of air growing faster and faster against her neck, then her cheek, then her lips. And even though it’d been a long time, she knew what was coming a split second before he pressed his mouth against hers. Her sound of protest was lost in the space between their mouths as he swiped his tongue against her lips. And then there was nothing but Finn and his sinful mouth and his body flush against hers. He swept his tongue inside her mouth, and Lord, had he always tasted this good? Had he always kissed this good? Never breaking away from her mouth, he walked them until Willow’s back was pressed against the wall, and then he just sort of…settled in. His hips held hers against the wall, the length of his erection pressing into her, proving this wasn’t at all one-sided as his hand continued its maddening path along her hip. But then—Lord, then he slipped his thumb under the waistband of her shorts until there was nothing between his rough fingertip and the part of her body forever marked as his. If it were possible, the soft caresses had her melting even further into him. He kissed her like he was a starving man feasting on his first meal in a month. She’d forgotten how he’d always put his whole body into it, the heat and solidness of him pressing against her, making her feel safe and secure. Finn groaned into her mouth as he deepened the kiss even more, and all she could do was clutch him, one hand fisting the front of his shirt and the other pressed against his side where her tree was eternally imprinted. “You feel so damn good,” Finn said against her lips. Willow murmured her agreement into his mouth because there was no denying it. Her body was on fire, her nipples hard points pressing against his chest, her skin lit up from the inside out. And then Finn’s thumb, rubbing maddeningly against her tattoo, slipped to the right until he was as close to the Promised Land as he’d been in a long time. He didn’t try to push it any further, just ran his thumb back and forth right above where she was wet and ready for him until she thought she’d die.


Brighton Walsh spent nearly a decade as a professional photographer before deciding to take her storytelling in a different direction and reconnect with her first love: writing. When she’s not pounding away at the keyboard, she’s probably either reading or shopping—maybe even both at once. She lives in the Midwest with her husband and two children, and, yes, she considers forty degrees to be hoodie weather. Her home is the setting for frequent dance parties, Lego battles, and more laughter than she thought possible.