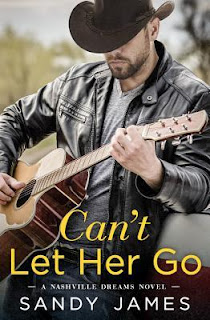 In Nashville the music is louder, the dreams are bigger, and love can bring a cowboy to his knees.

Ethan Walker is Nashville royalty. Born to the King and Queen of Country Music, he's spent his life trying to escape the spotlight of his parents' fame, even walking away from his own promising singing career. He's the kind of cowboy who prefers flannel to flashbulbs, hay fields to hit records, and the solitude of his horse farm to the nightlife along Music Row. The last thing he wants is attention, especially when it comes from country's latest star...

Chelsea Harris's meteoric rise up the charts and string of celebrity boyfriends mean that wherever she goes, the paparazzi follow. A duet with Nashville's favorite son is exactly what her new charity album needs, but when she approaches Ethan, he turns her down flat. To win the camera-shy cowboy over, Chelsea will have to approach him on his terms. Trouble is, the more time she spends on his farm, the more Ethan wants to keep her there.

This was my first title by this author, and it is not going to be my last.  I enjoyed the characters, I thought they were realistic and they seemed like people.  The writing was even and there were not any places where I felt the story was too rushed or too slow.  There were a lot of references to a previous title, which did at points make me feel like there was info I didn't totally have, but this was filled in enough that I did not feel that I was lost.

Ethan is the son of country music legends, and briefly was a teen star (or on the road to being one). Chelsea is putting together a duets album with herself and the children of former stars.  She can't understand why he says no, repeatedly, to her requests...so she decides to enlist his assistance in purchasing and boarding a horse.  Is it a ploy?  Yes.  Does he see through it?  Also yes.  But, it gets them together and in one another's space...and the sparks fly.

I enjoyed this title.  I really liked Ethan, and I really understood the reasons he was so reluctant to have anything to do with the press or the spotlight, and why a relationship with Chelsea would be tough for him, no matter how much he cared.