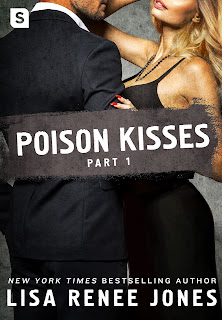 Amanda Skye made me want her. She made me trust her. She made me love her. Then she betrayed me. And now, a madman brings us together again and before our battle with him is over, I will make sure that she never forgets my name: Seth Cage. The Fixer for The Brandon Family Empire, but to a covert CIA operation, I will always be The Assassin. And to Amanda, I will be the man who made her moan, sigh, and beg. And I will make her beg.

Lisa Renee Jones is the absolute queen of 3 things:

1. Cliffhangers
2. Hot, Sexy Alpha Heroes who are a little dangerous
3. Books that are impossible to review without spoilers

And, this book meets all 3 of those criteria perfectly.  You find out, quickly (in the blurb actually) that Amanda and Seth have a history.  A passionate, twisty, complicated and interesting history.  Through flashbacks, you get a glimpse of this history, enough to be able to feel the connection between Seth and Amanda that both are trying to pretend isn't there...except when they are giving in to their mutual passion.

As always, the book moves quickly without boring the reader or making them feel that there are things they should have been told but weren't.

Seth just might be my favorite of all of Ms. Jones' heroes, and that is saying a lot.  I love his intensity, his passion, how conflicted and determined he is...all of it goes together to create one heck of a steamy first book in the 3-part series.  I was engaged from the beginning to the cliffhanger end.

I am looking forward to the next title and I recommend this one!

Amanda Skye made me want her. She made me trust her. She made me love her. Then she betrayed me. And now, a madman brings us together again and before our battle with him is over, I will make sure that she never forgets my name: Seth Cage. The Fixer for The Brandon Family Empire, but to a covert CIA operation, I will always be The Assassin. And to Amanda, I will be the man who made her moan, sigh, and beg. And I will make her beg.

I loved her. She left me. She betrayed me but now it's time to open the closed doors. I'll tell her my secret if she tells me hers. Our history, is more than lies. It's our story, and I will do whatever it takes to reveal it all. I'm the Assassin, She's The Poison Princess. We're going to kill the bad guys, but we're still deciding if we're enemies. The one thing for certain, is we're both going to strip down and get bare.

Those you love, know how to hurt you. Those you love, know what to hide, because they know what is unforgivable to you. Now that I know what Seth hid from me, I want the secret to be the lie. I don't want to kill him. I don't want to leave him. I guess that's why they say there is a fine line between love and hate. I love and hate that man with such passion, that it damn near hurts. But now, as we face down our shared enemies, as we are lead right back to an explosive discovery about my family, and to the night Seth and I parted ways, we will both be exposed in every way. And it's time for me to decide if I plan to love Seth Cage for the rest of my life, or kill him, before he kills me.

“I hate you, Seth Cage,” she proclaims in what I know to be an out-of-character emotional outburst that tells me I’ve rattled her.

And earns her my cool reply. “There’s a fine line between love and hate, sweetheart,” I say, but I don’t want her to hate me and it pisses me off. What is it about this woman that makes her my weakness? “I wonder if I missed the taste of poison on your lips, or did I just choose to ignore it?” And I need to know that answer. I close my mouth down on hers, my tongue sliding into her mouth, rough, angry, but she doesn’t respond. She doesn’t even touch me, and I won’t allow her that win. I fold her against me, cupping the back of her head, my tongue licking against hers until she finally fucking moans, and responds.

And damn it, she still tastes just as good as she did, just as right when she’s wrong, but at least I know now. Everything right about this woman will always be wrong, including the moment she bites my lips, drawing blood. “I still hate you,” she hisses.

Wiping my lip, I’m wildly aroused by what just happened, which proves how fucked in the head this woman makes me. And while I’m certain we’d both be more than comfortable with the idea of me pulling her skirt up and fucking her right now, and letting her think she’s manipulating me again, that has to wait until I have her someplace to myself. I release her, snatching up her gun and shoving it under my jacket, inside my holster. “Meet me at the south exit. If you aren’t there, I’ll kill you and then move on to Plan B and kill Franklin. And yes. This is a test. Pass it or you’ll be in my bed, in handcuffs for the rest of your life.”

I move to the door and exit into the staff hallway, and then the main school hallway, the scent of her, sweet jasmine, clinging to my skin. Damn it, I used to love that smell.

I’m halfway to the exit when suddenly she’s beside me. “As I know you know from whatever file they gave you on me,” she says without looking at me, “I watched people die because of that man in China seven years ago when he set off poison gas in the subway. I’m not sitting back while he does it again.”

I don’t reply. I just keep walking, but now she’s by my side again, as she was for three solid months, three years ago. Her words and actions are reminding me of what I’d found so damn appealing about this woman: her conviction and her moral compass that were greater than mine, that made her too good for me, and yet, made me want her all the more. Only, it was an act, a façade maintained even now and well. She’s an enemy in an uncomfortable alliance. I don’t believe a word she has said.

We reach the exit and I pause with her directly to my right, my eyes capturing hers. “You’re with me now and no one gets to take you from me. And I’m the only one who gets to kill you.”

“You’re so damn romantic,” she says. “No wonder I missed you.”

“You missed me, sweetheart?”

My lips curve. “And yet you kissed me like you missed me.”

New York Times and USA Today bestselling author Lisa Renee Jones is the author of the highly acclaimed INSIDE OUT series.

In addition to the success of Lisa's INSIDE OUT series, she has published many successful titles. The TALL, DARK AND DEADLY series and THE SECRET LIFE OF AMY BENSEN series, both spent several months on a combination of the New York Times and USA Today bestselling lists. Lisa is also the author of the bestselling DIRTY MONEY and WHITE LIES series. Presently, Lisa is working on her Murder Girl/Lilah Love series to be published by Montlake.

Prior to publishing Lisa owned multi-state staffing agency that was recognized many times by The Austin Business Journal and also praised by the Dallas Women's Magazine. In 1998 Lisa was listed as the #7 growing women owned business in Entrepreneur Magazine.