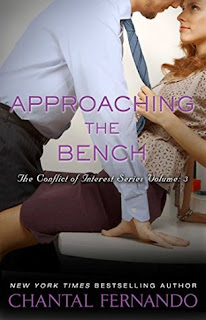 A tenacious, resilient female judge must find a way to work with her carefree clerk as they find themselves in danger when a fugitive sets his sights on revenge in the third book in New York Times bestselling author Chantal Fernando’s sexy and thrilling Conflict of Interest Series.

Trinity Williams, known as “Medusa” for her stony expressions and unyielding reputation, constantly has her guard up—how else is the youngest female judge in the country supposed to survive in such a male-dominated profession? She made the decision long ago that laughter and a carefree attitude have no business in a courtroom and achieving her professional goals is the only thing she has left. It’s just her luck that her new law clerk, Callum Hopkins, believes the exact opposite.

Callum Hopkins thinks that nothing should ever be too serious in life—why can’t he mix business with pleasure? When he first starts working for his hot new boss, they clash at every turn. He makes it his mission to get Judge Williams to see things his way for once.

But when Callum finds himself in the wrong place at the wrong time as an escaped convict comes after Trinity, he realizes it’s not all fun and games anymore. Now in witness protection together until the authorities can catch the fugitive, this unlikely pair must learn to trust one another and work together to stay alive. Far away from the courtroom, Trinity and Callum are suddenly free to stop butting heads, and stop fighting the growing attraction between them.

With suspense and plenty of chemistry, Approaching the Bench proves once again that “Chantal Fernando knows how to draw you in and keep you hooked”

I enjoyed this title. It was actually shorter, and a little lighter than I was expecting.

Trinity and Callum are judge and law clerk. She is by the book, a little cold, and not interested in her younger law clerk, even if he is her type. Callum is younger, just out of school, and more than a little interested in seeing what is behind the facade of his boss.

But, she is not going there with him, no matter how much she wants to...until he saves her life. I liked this twist, and the way it moved the story. I liked that we didn't spend the entire book in a judge's chambers watching 2 people flirt over their lunch and coffee orders.

As I mentioned, this book had a lighter feel to it than the previous books in the series, which was interesting and gave it a difference that I enjoyed.

The writing was strong and flowed smoothly and in such a way that I believed I was reading about real people.

I enjoyed this title, I recommend it, and I am looking forward to the next one!