THE WAY BACK TO US BY JAMIE HOWARD - ARC REVIEW 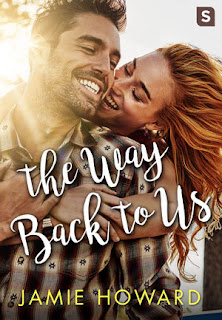 Gavin MacCormack found the one. He fell in love. Hard. Until one night he ran out for some ice cream and came back to an empty dorm room, closets bare and nothing but a quick hand-written note saying, I’m sorry. Those two words taught Gavin the meaning of heartbreak. A feeling he never wants to encounter again. And as the lead singer of a Grammy award-winning band he's had plenty of opportunities for casual, no-strings fun, which is just the way he likes it.

Dani Winters has had more names than birthdays. On the run with her father for nearly as long as she can remember, she’s lived her life by three rules—always plan for the worst, maintain a low profile at all costs, and never let anyone get too close. Except she broke that last rule once and her heart has never forgiven her.

One chance encounter changes everything. Seeing Dani resurrects feelings in Gavin he thought were long buried, and this time he’s not letting her disappear without getting some answers. But Dani’s life is the definition of complicated and she’s playing with fire by letting Gavin back in. When the time comes to run again, Dani needs to decide if a life without love is worth living, or if it’s time to stop running and fight.

Gavin and Dani were together years ago, and then she disappeared. No contact, no emails, nothing for years until they run into one another at an event and then at a bar.

Dani is running from somethikng, and she is not able/willing to tell Gavin what and she is afraid that being with him will get him (or her) hurt or killed.

So, there are reasons for her feeling that they should not be together.  And, Gavin doesn't care.  He wants Dani, and he really isn't all that concerned about her reasons for telling him no, and for pulling away from any sort of serious relationship with him.

I liked the set up of this title, and the idea that there was a reason that Dani was not able to stay, and, up until the end of the book, I was really on board with this.  But, I didn't really buy the resolution of the book.  I guess it could happen this way, I have little to no experience with being on the run from anyone, but it just didn't totally work for me.  Not enough for me to dislike the book as a whole, but enough for me to be pulled a little out of it right at the end.

I do recommend this title overall.

Labels: 3 Stars, Jamie Howard, Review by Laura, The way Back to Us