ONE AND DONE BY MELYNDA PRICE - ARC REVIEW 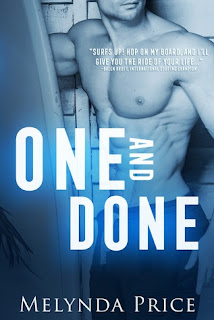 When Autumn’s best friend surprises her with a girls’ getaway in Cyprus for her 30th birthday, she makes up her mind that now is her time to shine. This is exactly the fresh start she needs to put the past and a messy divorce behind her. She might have bought into the ideology of Mr. Right once, but that myth was long busted—been there, done that—and she has the broken heart to prove it.
When a family emergency causes her bestie to bail on her minutes before their flight takes off, Autumn finds herself alone and bound for the “Island of Love.” Her friend had an itinerary chock-full of girlfriend goodies planned—massages, salsa lessons, parasailing… Okay, maybe not parasailing, but this was going to be a week of fun, and now it’s a week for one. Armed with her Best Friends Guide Book for Having Fun—and no best friend—Autumn plans to check into her beachside villa with her new BFF, Captain Morgan.

Being ranked one of the top surfers in the world does have its perks, but discovering your sex-tape was released on social media? Definitely not one of them. On the heels of a scandal that has sponsors threatening to cancel his contracts, Balen Kroft has strict instructions from his publicist to lie low for the next week while this whole fiasco blows over. Seven days of incognito before hitting the surf again at the Titans of Mavericks Invitational might not be such a bad thing—rest, relaxation, and fun in the sun… Until he comes face-to-face with his own personal riptide. If he’s not careful, Autumn Harris may just pull him under.

The fiery ginger has no idea who Balen is and he’s determined to keep it that way. After the last eight months and a series of self-destructive behaviors, he’s content to let her believe he’s a homeless, beach-bumming surfer, living a carefree life one day at a time.

Autumn’s sexy vagabond is just charming enough to convince her to let him crash in the spare room of her villa. In exchange, he offers to be her new bestie for the week, taking her on all the excursions her friend had planned. It’s a tempting offer… Her own personal tour guide and the possibility of some hot, no-strings, surfer-guy sex? What woman in her right mind would turn that down? She’s a big girl who knows the score. What can possibly go wrong?

Balen and Autumn meet on an airplane.  He is headed home, and she is headed on a vacation.

I loved the connection they have with one another, and I loved that at the beginning, when you first meet Balen, he is sort of a jerk.  Well, not sort of, he is and Autumn calls him on it.

Balen is a well-known professional surfer, and it seems that the only person in the world who doesn't know who he is.  And, he likes this, the idea that the time she spends with him is because of him, and not because of who he is.

Autumn's friend Summer leaves her a book, a list of things she needs to do while on vacation.  Some of the items on the list are maybe a little less easy to pull off than the others, but Balen and Autumn work with the book and work through the list of things in the book.  It was fun to see him support her, and to see the relationship develop.

The chemistry between them is strong through the whole book, and you feel the attraction.

I did find the end a little frustrating, as I thought the over-reaction was out of character for Autumn, but at the same time, I was able to ignore it.  Mostly.

I did enjoy this title overall.

Labels: 3 Stars, Melynda Price, One and Done, Review by Laura