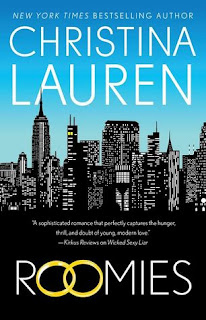 Marriages of convenience are so…inconvenient.

Rescued by Calvin McLoughlin from a would-be subway attacker, Holland Bakker pays the brilliant musician back by pulling some of her errand-girl strings and getting him an audition with a big-time musical director. When the tryout goes better than even Holland could have imagined, Calvin is set for a great entry into Broadway—until he admits his student visa has expired and he’s in the country illegally.

Holland impulsively offers to wed the Irishman to keep him in New York, her growing infatuation a secret only to him. As their relationship evolves from awkward roommates to besotted lovers, Calvin becomes the darling of Broadway. In the middle of the theatrics and the acting-not-acting, what will it take for Holland and Calvin to realise that they both stopped pretending a long time ago?

This is my first title by Christina Lauren.  I am not even sure how that happened, honestly, as I have been hearing about them for a while, and everyone I know has read something by them...at least it feels that way.

So, I went into this with expectations, but no real idea what I was getting myself into.

What I ended up getting myself into was a well-written, well-plotted, believable romance about 2 people I genuinely liked and with supporting characters I liked as well (ok, there were a couple I think could have been left at the curb, but as Holland does just that, it all worked out just fine) and a setting that was both interesting and not too immersive as to lose you in the story of the characters because of the plot happening around them.

Calvin and Holland meet in a rather odd way, and in a way that I am not going to spoil.  But I will say, the wry humor that is present in this book (and possibly all of the others, I am not sure) was apparent right away in the conversations immediately after what is their initial meeting and then their most memorable.

This book has emotion, and it has heart.  You understand so much of where Calvin is coming from, and what leads him to do the things he does, even though he colossally fucks (there's really no other word for a certain part, also a spoiler so I am not telling) things up, and more than once, to varying degrees.

I also love how self-aware this book is, and by default it's heroine.  There is a part where Holland realizes that she is a cliche, and that she hates it in books when the characters do something, but that all of a sudden she understands why authors write that.  I loved that, the idea that the authors, and their characters, are aware of when they are acting like characters in a book.  It gives depth to a story, it makes them real, and it gives the characters on the page a real connection to the reader.

Fake relationship books can work, and they can work really well.  But, in order for them to work, there have to be a couple of people you believe want to be together.  I love that not only do you believe this, but at the end, when it all falls apart and real feelings emerge, I love how the little clues and glimpses about how they both have felt this whole time work their way so perfectly into the inevitable "where do we go from here" conversation that happens in any fake relationship book.

I enjoyed this book, a lot.  I am looking forward to the next title by this author duo, and I am thinking I may just need to read their previous releases.