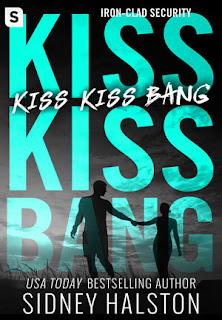 Six-foot-two and ripped...with superior computer skills, Josef “Joey” Clad is not your typical ex-Marine. The co-owner of Iron-Clad securities is 100% Alpha male, but under his muscular physique, he's the best hacker in Miami who specializes in running Iron-Clad's cyber ops. The perfect skill set for their new client who is getting threatening emails, a client who he definitely wants to get to know better. Much better.

Single mom, widow, Olivia Monroe has exceptional dreams that she refuses to let go of. Fifteen years ago, she left her broken home in New York City and never looked back. Now a dark horse candidate for Florida governor, she's not looking for a relationship. Even with the hot guy who sweeps in and saves her computer the night before a big speech. Her hero has trouble written all over him. Joey is too handsome, too funny, too confident, and way too hard to resist.

Too bad he's now her bodyguard.

Sidney Halston books are almost always a fun ride, and this was no exception.  Joey is the "Clad" in iron-Clad securities and he is the perfect Alpha Male, the man who is all man and who also takes the time to be kind to a woman who is clearly at the end of her rope in an electronics store (and, let's face it, if I am going to have a come apart, it's going to be in an electronics store. I was able to totally relate).

I liked Olivia a lot, even though there were times I thought she was incredibly naive, although the plot did give some explanation for this, so I was mostly able to let that go.  I liked that she was attracted to Joey but also a strong woman who was not willing to make her entire life about a man.  I appreciate the romance novel where the woman is capable and still wants the romance, although in this one, she was the one fighting the relationship much more than Joey did.

The plot was mostly believable.  There were a couple of places where I did a bit of a side-eye at some of the actions of the characters, but it was mostly reasonable.  I did think it was incredibly obvious who was threatening Olivia...but by the way the book was constructed and the way the plot unfolded, I actually think this was intentional, to allow the reader to have the suspense while balancing it with the romantic narrative.

I did enjoy this title and I am looking forward to the next book by the author.