THE GAME BY VANESSA FEWINGS-REVIEW 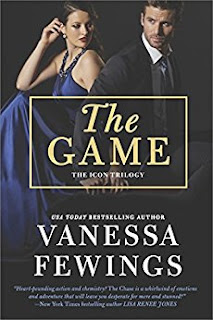 Can she outwit the ultimate master in a timeless game of seduction?

Chasing Icon, the world's slickest art thief, was the most seductive thrill of London art investigator Zara Leighton's career…until the clues led her to the man who holds command of her body and heart, Tobias Wilder, an American billionaire with charisma to spare. Her duty to capture him is complicated by the intensity of their passion. Her will to end their connection is tinted with red-hot need to never let him go.

Tobias's heists are about more than money and ego. His plot to orchestrate the perfect deception in Los Angeles is destiny. No one—not even Zara—knows the depths of his motivation. And no one suspects the truth behind a single artifact that holds the secrets to an entire civilization. Forced to deny one calling to satisfy another, he knows something must be sacrificed: his code of honor or his loyalty to Zara.

I am at a loss as to how to review this book.

Was it great? Yes, it was. There were a couple of small things that I am not sure I was totally on board with, and one little thing that seemed out of character for Zara, but nothing major and I see the reason for the author's choice.

Did you learn more about Tobias and Zara? Yes, you definitely did. And, their relationship certainly grows and evolves.

Did it take turns you will NOT see coming? Oh, it so did that, this definitely happened.

Was it well written and engaging? Yes, it was. You are so drawn to the characters, and to the story, that you don't want to put it down.

Is being specific about any of this a super huge spoiler? Yup.

So, I have literally nothing to say as I would not want to ruin this for another reader.

Go, read the first one, be enthralled by this one, and wait on the edge of your seat for the 3rd installment. To tell you anything else would spoil it.