MAYBE I DO BY NICOLE MCLAUGHLIN-BLOG TOUR 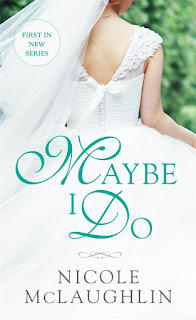 She doesn’t believe in fairy tales. He’s married to his job. Maybe whiskey is the secret ingredient that will bring them together—and give true love a shot?

Wedding photographer Charlotte Linley loves her work—even though she hates weddings. Sure, she still holds a grudge after being left at the altar by her high-school sweetheart. But today Charlotte is just happy to have complete control over her career, which is flourishing. Especially since she joined forces with one of the three gorgeous owners of The Stag, a boutique distillery that has become Kansas City’s hottest wedding venue.

Dean Troyer, bitter after the end of his own marriage, knows that Charlotte is the real deal—beautiful, talented, and successful. He may flirt with her every time she comes to The Stag but Dean is determined to keep his professional distance. . .particularly now that she’s helping him with his own sister’s wedding. The only problem? The more time Dean spends with Charlotte, the deeper their connection grows. Is this a rom-com cliché or could it be that these two jaded souls in the wedding business have finally found their real-life happily ever after? 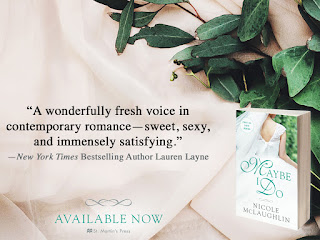 Charlotte and Dean have been flirting for 3 years. Planning their schedules around making sure they bump into one another at weddings she photographs that are held in his distillery. The flirting is serious but it is the kind of flirting where both are serious, but are both waiting for the other person to make the first move...while being jealous of the attentions given to them by others.

Until Dean finally lets go and acts on the attraction between them. Sparks fly, and then he pulls away. You know he thinks she is too young for him, that he is old and that he can't offer the things a young woman will want from a marriage. And, in a way, he just might be right. There are a lot of serious, life events going on in this book, and they are worked together in a way that it feels real and authentic and not at all overdone.

There are siblings, exes, and friends as supporting characters, and they all add to the story but at the same time add drama.

This book was real life. With real issues, and real reasons that they each had to maybe not be together, and to struggle with what they wanted.

I liked the idea that, at the end, you really believe the relationship is going to last...because they went into it with their eyes open, not just relying on their hearts and the instant attraction that fades.

This book might be more real life than some readers like, as it is a little heavier and there are some more serious themes working their way through the book, but I found this refreshing and I enjoyed it.

“One, two, three, go!” Charlotte called. The bouquet shot into the air as the front bridesmaid soared into a jump that would make a basketball star envious. All the while Charlotte’s shutter rapidly took frame after frame. As the bridesmaid landed, stems in hand, someone else’s arm flung into her face, effectively startling her and sending the flowers to the floor. A third woman—somewhat older—surprised all the bystanders by quickly swiping it off the floor.

Charlotte laughed as she took a shot with the bride and the gloating bouquet winner, and then immediately got back into position as the DJ started up “Another One Bites the Dust” for the garter removal. She inwardly groaned. This guy needed some new material.

When the groom was done sticking his head under the bride’s skirt and making a spectacle of himself, he lined up, ready to send the little scrap of lace and elastic into the—somewhat small—mass of young men.

“You ever notice how the guys always look as if they’re participating under duress?” a deep familiar voice said close to Charlotte’s ear. Goose bumps rose on her neck and arms.

She grinned but didn’t lower the camera from her eye. The music and conversation in the room were loud enough that she knew they wouldn’t be heard. “Can’t say that I blame them.”

The words had come out without any thought and Charlotte really wished she could see Dean’s reaction to them, but the groom released the garter right at that moment. The male recipients were nowhere as enthusiastic as the ladies had been, but one guy did reach out and snag it, almost as a reflexive action.

Yep, the shocked look on his face said that’s exactly what it had been, and he glanced around like he wanted someone to throw it at.

Charlotte laughed and looked at Dean. “He looks like he’s wishing he’d sat this one out right about now.”

“Yes he does.” Dean crossed his arms and smirked as Charlotte stepped forward to set up the customary shot of the groom and the reluctant garter catcher.

She was happy to find that Dean was still waiting for her on the edge of the dance floor when she was finished.

“I’ve missed talking to you tonight,” she said.

One corner of his lips quirked up. “You have?” His tone was all teasing, but she could have sworn there was a hint of uncertainty. Surely he knew she was into him.

“Of course. I would assume it was because you were busy, but you had time to talk with black dress lady for a long time.”

“Charlotte,” he whispered, shaking his head. One of his go-to body movements when they spoke. He huffed out an embarrassed laugh. “What am I gonna do with you?”

“Well, you can start by not making me so jealous.”

His eyes flicked to hers, his lips parting. She could tell he wanted to respond, that her words had taken him by surprise. She continued to watch him as the music filled in the silence between them. It was hard to believe she’d let the teasing between them just go where it had, but she didn’t really regret it. She liked this man, and she’d done everything she could to tell him that except physically coming on to him. Was that what she needed to do? Finally, he appeared to mentally shake off her comment, his lips pursing as he inhaled a deep breath. Damn.

“How much longer are you here?” he asked.

She pulled out her phone and grimaced at the time. “Over an hour.”

He nodded. “Can you spare me a minute? I wanted to talk to you about something.”

Oh God. He was going to finally make a move. She could feel it. Her brazen comment about jealousy had worked.

Or maybe he was going to finally let her down easy. Shit.

She swallowed. “Of course. I’d love that.”

Following him toward the bar, Charlotte caught Lauren’s attention and sent her an I’ll-be-right-back look. Lauren nodded but Charlotte could see the curiosity written all over her friend’s face.

Dean stepped behind the bar, grabbed a pint glass, and proceeded to fill it with ice, lemon-lime soda, and then the tiniest splash of grenadine. Her favorite, and she couldn’t help melting inside that he always remembered. She couldn’t decide if it was a good sign or not. He slid it across the bar to her and then angled his head toward the little break room. Suddenly panicked, Charlotte dug in the bottom of her bag for a piece of gum and stuffed it into her mouth.

Dean stepped into the room and held the door open for Charlotte. She followed and then turned to face him, her heart pounding in her chest.

But instead of walking toward her, he headed for the sofa. “Have a seat.”

“Oh, okay.” She did just that, and when she sat down, he took the sofa across from her.

Ouch. Definitely not a good sign. Was he … mad at her? First she’d embarrassed him with the sexy photos, and then she’d just now crossed the line with the jealousy comment. Oh shit. He was totally going to confront her about it.

“So, first I should apologize for what I said out there. That was so completely inappropriate and I should have known better,” she blurted.

Dean froze, his eyes meeting hers. “What are you talking about?”

“When I said you should stop making me jealous. I was out of line and I—”

Dean began to chuckle. “Did you think that’s what I brought you in here to say?”

Charlotte exhaled, relief washing over her. “Yes. I did.”

He grinned. “Charlotte, I’m going to be the one to cross the line here when I say … my … inappropriate conversations with you are my favorite thing about working weddings here.”

“They are?” she asked with a smile.

“They are. In fact, I probably like them a little too much.”

He reached up and scratched at the back of his neck before leaning his elbows on his knees. “It’s actually something I need to ask you.”

A wedding party of butterflies came to life in her stomach. “Oh? Okay, shoot.”

“You might recall last weekend I mentioned my sister was engaged.”

Charlotte’s happiness deflated a bit. If all he needed was to hire her for photos, such a production hadn’t really been necessary. It was what she did for a living, for goodness’ sake. “Of course. So do you need a photographer?” 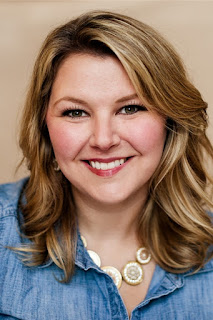 Nicole McLaughlin wrote her first full length book (6 pages) about the birth of her baby sister, when she was eight years old. She only finished it because her mother bribed her with a Rick Astley cassette tape. Sad, but true. Now her characters are what keep her writing and her subject matter has gotten a little bit deeper and a lot more romantic. She resides in a small town outside of Kansas City with her husband and three sons. When she isn’t writing, she’s a wedding and portrait photographer, loves to cook, and watch historical dramas or documentaries. Nicole is the author of two series with St. Martin's Press, the Man Enough series (All I Ask) and Whiskey and Weddings (Maybe I Do).