Tijan’s Fallen Crest crew are back for a weekend of mischief that takes a sinister turn; all four couples from J. Daniels’ Alabama Summer series gear up for Halloween in their own sexy ways, with a special surprise at the end; Helena Hunting’s characters from Shacking Up plan a Halloween gala that features a few ghouls and witches; Bella Jewel brings the chills and thrills in her suspenseful take on Halloween night; and Tara Sivec gathers the Holiday family together one last time as they try to make this ghostly holiday one to remember—or one they’d rather forget…

Cozy up with a mug of hot cider on a dark night and fall under the spell of this Halloween anthology!

I enjoyed the glimpse into Ruby and Bane and the chance to see them after the events of Shacking Up. But, that said, you need to have read it in order to enjoy this, as I don't think these were intended to be read as standalones.

It was essentially an extended epilogue with the addition, I think, of possibly setting up a future couple based on the interactions of the characters in the story.

was it fun? Absolutely, if you have read Shacking Up, you got to see the characters again, where they are now, and a glimpse into where things are going for them, which is always a treat. Add in Helena Hunting and you have a mix of humor and swoony hot sex that is very characteristic of her writing.

I only read this in the anthology, as I was not familiar enough with the other characters in the other stories to really be able to engage with them.

I recommend the Helena Hunting novella.

GETTING DOWN by Helena Hunting

One eyebrow quirks as he asks, “You two playing dress-up?”
I grin. I assume it must look incredibly evil considering the makeup I’m currently sporting but am not allowed to see yet. “We’re practicing for Halloween.”
His mouth tilts in a smirk. “Fuck yes you are.”
Oh yeah. I’m getting so lucky later. I don’t think I’m changing out of this costume, as difficult as it might be to sit in all night considering the massive wings attached to my back. I’ll make it work. Bancroft is very well acquainted with my love of all things Halloween and horror.
“What’s happening in there?” Armstrong elbows Bancroft in the ribs so he can poke his head in the door.
He edges inside the bathroom and his eyes go wide as they move over Amie. I suppose I can understand why. I’ve managed to get her into a pair of red satin booty shorts and a tight T-shirt. Her bra is very, very visible through the thin fabric. Her amazing legs are on display. Her hair is pulled up into two pigtails. If I wasn’t 100 percent sure she wasn’t even close to Bancroft’s type, I might be inclined to make her cover up. But he’s not into leggy blondes. He’s into somewhat petite brunettes. He also likes the sass, which I have an abundance of.
“What’re you wearing?” Armstrong asks. He sounds very much like he’s sucked on a helium balloon for shits and giggles.
Amie looks down at herself, as if she doesn’t understand his concern. She does. Fully. We talked about how he wouldn’t approve of this costume at all before they arrived. Which is the exact reason I suggested she continue to wear it.
I’m not actively trying to interfere in my best friend’s relationship, but I’m not fully convinced he’s the perfect fit for her, either. He’s far too trust - fund - pickle - up - ass. 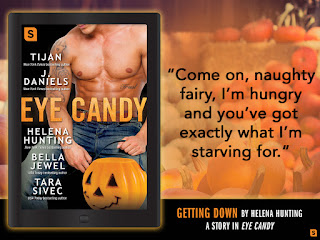 Bella Jewel is a USA Today bestselling author of over 18 e-books, including the popular Alphas Heart eOriginal series with St. Martin's Press. She lives in North Queensland where she's working on her next novel.

Tijan is a New York Times Bestselling author of the Carter Reed Series, the Fallen Crest Series, and the Broken and Screwed Series among others. She lives in north Minnesota.

Tara Sivec is a USA Today best-selling author and the Best Indie Author in the Indie Romance Convention Reader's Choice Awards in 2014. She lives in Ohio with her husband and two children.

J. Daniels is the New York Times and USA Today bestselling author of the Sweet Addiction series, the Alabama Summer series, and the Dirty Deeds series. J grew up in Baltimore and resides in Maryland with her family.