Named Best Book of the Month by Amazon and iBooks

The Bachelor meets The Runaway Bride in this addictive romance novel about a reality TV producer falling for her would-be star: a Montana heartthrob who wants nothing to do with the show.

Jordan Carpenter thinks she’s finally found the perfect candidate for Jilted, a new dating show about runaway grooms: Luke Elliott, a playboy firefighter who’s left not one but three brides at the altar. The only problem? Luke refuses to answer Jordan’s emails or return her calls. Which is how she ends up on a flight to Montana to recruit him in person. It’s not Manhattan but at least the locals in Lucky Hollow seem friendly . . . except for Luke, who’s more intense—and way hotter—than the slick womanizer Jordan expected.

Eager to put the past behind him, Luke has zero intention of following this gorgeous, fast-talking city girl back to New York. But before he can send her packing, Jordan’s everywhere: at his favorite bar, the county fair, even his exes’ book club. Annoyingly, everyone in Lucky Hollow seems to like her—and deep down, she’s starting to grow on him too. But the more he fights her constant pestering, the more Luke finds himself wishing that Jordan would kick off her high heels and make herself comfortable in his arms. 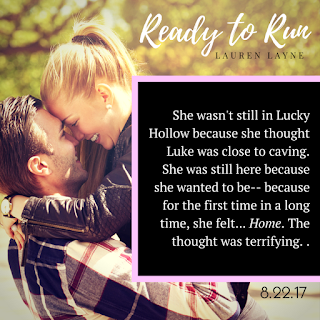 Well, this was most certainly NOT that book. And, really, I don't actually think this is going to happen. if you have read Lauren Layne before, you know exactly what I am talking about. If you haven't, what are you waiting for?

I loved this title. The premise, so new and it felt different. The idea of a fireman who had jilted numerous brides (or had he???) and the television producer who thinks that it is impossible to believe that someone wouldn't want the opportunity to be a part, the central figure, of a reality tv series.

Jordan and Luke have intense, and instant chemistry, but their lives are so different it is difficult for them to see why they would ever be able to work out. Even if Jordan were to give up on the idea of Luke being a part of the show, she is a New Yorker, and one who left small town life, intentionally. For reasons that, I think, would result in a lot of us doing the exact same thing.

Luke is small town, but in a good way. In the way that there are people who lie in small towns because they like knowing everyone, and being a part of the closeness that only exists in a small town. Working as a fireman in this town is a way of life for him, it is protecting the town, and the people in the town, and it is what makes him who he is. Luke protects the people that he loves, whether it is leaving the am of a wedding, pulling them (and the occasional cat) out of a burning building, or keeping their secrets, even at a cost to himself.

Layne almost makes living in a small town sound good. And, as someone who understands where Jordan is coming from (I grew up in a smaller town and there is no way, none, that I can see myself going back for longer than a visit) this was quite a trick.

You like Jordan. She isn't selfish, and she isn't really looking to exploit Luke, she is just convinced there is a story there, in the idea of someone who has left not one, not 2, but 3 brides...on the day of their wedding. And, she is right, there is a story. It just isn't what she was expecting. I am not going to say what it is here, but I am going to say that it works. It feels real, and that it would compel the people involved to act in the ways they do...and really, that is what matters in a book, that you can believe that the people in the story are acting the way real people would. As long as this is an element, you can make just about any story work.

Neither was falling in love with Luke. But, that happened too. And, the way it is resolved, and the inclusion of the stories of the people in the town as the "what happened" around those weddings starts to become clear, well, you fall in love with Luke right along with Jordan.

Go read this one. You will be glad you did.

I recommend this title and I can't wait to read the next one.

I have to admit reality TV shows about love are just not my thing. Lauren Layne writing about them? Definitely my thing. Ready to Run is the first book in a new sexy, sweet and fun series from Lauren Layne and I absolutely loved it. It's full of the heart and wittiness I've come to expect from this author.

I adored Jordan. She's determined, focused and just plain fun. She had me laughing with how she handled Luke initially. I loved how she carried herself throughout the book. She's on a journey that she wasn't prepared for-not just for work, but emotionally as well, and the way the author weaves all of that together is fantastic. This is a character I want to hang out with, even if it means becoming running buddies...and I hate running.

Luke had me swooning. Hot, sexy, and a fireman to boot? He's guarded which just made me want to peek inside him to see what made him tick. He positively stole my heart and is one of my favorites heroes from this author.

There's an undeniable chemistry between these two characters. There's a spark, like two pieces of flint rubbing together, and once the inevitable fire starts? It's safe to say I thought my kindle would melt in some spots. The connection that is formed between these two is sweet and special.

I love the secondary characters in this book. Luke's firefighting friends had me cracking up. I loved how these people added to how Luke's story, I loved how they encouraged Jordan to push him. This is one small town where I'd love to go visit.

The pacing in this book was spot on. I never felt rushed nor did I feel the story lagged anywhere. It simply flowed from start to finish. The writing is sharp and fun. I thought this was a fresh look at a reality show based romance...because it's about more than the show. You become invested in these characters and their lives. I didn't want this story to end.

Lauren Layne has another hit on her hands with Ready to Run-and I'm eagerly awaiting the next book in this series. I recommend this book.