FALLING INTO THE BLACK BY LAUREN RUNOW-RELEASE BLITZ

Please join us in celebrating the release of FALLING INTO THE BLACK by Lauren Runow! 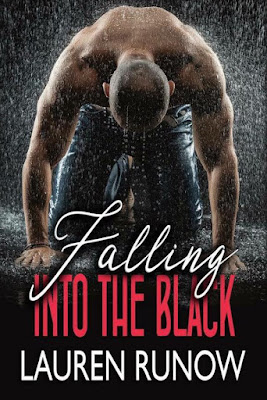 It was all going as planned until a friend asked for help with her club. The business was liberating. The company was intoxicating.

Two masked men became my euphoria. One was a player deep in the game. A teacher both intimately and figuratively.

The other was a quiet director. A man who tempted me with his stares and set me on fire with his dark whispers

His secrecy excited me, bringing me to levels I've never imagined. I thought we were playing a game, but little did I know he knew exactly who I was.

I just wish I figured out his true identity before I fell for his best friend.

* Falling into the Black is a standalone novel with an HEA.

To avoid some potential spoilers this may seem a bit vague-but I wouldn't want to spoil the book for anyone!

I had a hard time connecting with these characters in this setting. There were times I didn't know who I should root for. I mostly liked both male characters but I didn't always love our heroine. So I had a hard time being invested in how their situation would play out. I did like that we got to see into each character's headspace a bit with the different POV's, and that is a tricky thing to pull off, especially when you're writing three main characters instead of two. 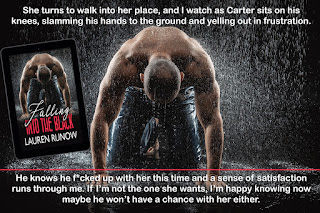 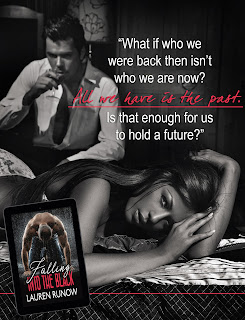 My lips tilt up slightly. “Pleasure to meet you.”

“Funny, sometimes you can tell because their name just fits them. I would never guess you for an Angie.”

“Why would you say that?”

He taps his lower lip with a long, deft finger, and I’m instantly distracted by the thought of what that finger could do.

“I don’t know. Just something told me that wasn’t you. You and Ashley were the only two people I couldn’t find any pictures of or any info on really. You guys are smart, or should I add, private.”

“Let’s go with private.” I wink, which makes him raise his eyebrows. I can tell I’m the oldest in the class, and the mad professor here seems to be closer to my age, but I’m still trying to figure out what his name is. “Can I play your little game?”

His lips push together as he nods his head in interest. “By all means. Do you want the class list?”

His head moves up and down slowly. “Take your best shot.” His arms open wide, allowing me to fully take in every part of him.

“Let’s see. I know it starts with a C by my registration, but you have that whole nerdy, indie vibe going on, so I’m going to rule out Chris, Charlie, and Cameron.” The barely noticeable lift to his lips tells me that neither of those is his name, so I start naming off every C name I can think of, waiting for any type of reaction to show in his features. “Christian, Caleb, Connor, Cody, Colin, Cole—” The twitch in his eye makes me stop. I pause, looking him up and down before slightly tilting my head in recognition. “Nice to meet you, Cole.”

The grin covering his face makes me sit back in my chair. Yup, I’m made for this.

“Nicely done, Angie. The master gets beat at his own game. After class you’re going to have to tell me more about how you did that.”

“Anytime, Professor Spence,” I say in a flirtatious way.

His eyes meet mine for what I think is a second too long for a student/teacher moment, but I don’t mind. When they break away, he addresses everyone else, “This course is going to be interactive, and I encourage participation. So, everyone get up, move closer, and gather around Mrs. Smith here.” He returns my earlier wink before turning back around and writing his name across the board.

I’m intrigued by his lecture the entire night, and yeah, a lot of it was because he’s easy on the eye. I also happen to love the way he challenges people and really gets us involved.

When he says good night, I turn to gather my things and am startled when I hear, “Angie, can I talk to you for a minute?”

My eyes meet with a fellow female student, who I shoot a smile before turning around. “Sure, Professor Spence.”

As I approach his desk, he’s gathering his paperwork to put into his backpack. He stops and turns to face me, leaning against the back of the desk and crossing his arms in front of his body. “So tell me, how did you guess my name?”

I tilt my head to the side, showing him the slightest grin. “Well, that’s my little secret. Just like you said, though, you can learn a lot about a person if you pay close enough attention.”

“I’m impressed. Still can’t believe I got your name wrong. First time that little game didn’t work out for me fully. Please tell me Angie isn’t your real name. Give me some kind of hope.”

I close my eyes, smiling but nodding my head slightly. “Okay, I’ll give you that. Angie isn’t my birth name. I legally changed it years ago.” I can’t believe I just told him that. No one here in San Francisco, or hell, in California, knows that Angie isn’t my real name. For some reason, I felt comfortable enough in this moment to admit it.

“Okay, I feel a little bit better now, like I’m not a complete failure at my own game. But how did you know mine?”

“I was already trying to guess what it was before you even spoke. I guess I like to play little games, too.”

He laughs. “That doesn’t answer my question, though.”

“I looked at what you were wearing, how you walked, your body type, the fact that you carry a Vans backpack instead of a briefcase.” I pick up his backpack to prove my point. “Then, just like you, I paid attention and took a gamble. I guess you can say I’m good at reading facial expressions. You gave it away when your eye twitched slightly after I said Cole.”

“Nicely done. You just might be cut out for this lawyer thing after all. So do I get to know your real name?”

I shake my head. “Nope, sorry. To you and everyone else, I’m Angie.” I start to walk away but look over my shoulder. “No offense, though.”

I hear him chuckle as he says, “None taken. See you Wednesday, Mrs. Smith.”

I turn back again, giving him a quick smile before saying, “It’s miss.”

Lauren Runow is the author of multiple Adult Contemporary Romance novels, some more dirty than others. When Lauren isn't writing, you'll find her listening to music, at her local CrossFit, reading, or at the baseball field with her boys. Her only vice is coffee, and she swears it makes her a better mom!.

Lauren is a graduate from the Academy of Art in San Francisco and is the founder and co-owner of the community magazine she and her husband publish. She lives in Northern California with her husband and two sons.