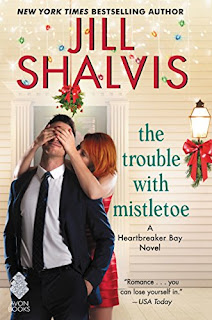 Willa Davis is wrangling puppies when Keane Winters stalks into her pet shop with frustration in his chocolate-brown eyes and a pink bedazzled cat carrier in his hand. He needs a kitty sitter, stat. But the last thing Willa needs is to rescue a guy who doesn’t even remember her . . .

He’ll get nothing but coal in his stocking.

Saddled with his great-aunt’s Feline from Hell, Keane is desperate to leave her in someone else’s capable hands. But in spite of the fact that he’s sure he’s never seen the drop-dead-gorgeous pet shop owner before, she seems to be mad at him . . .

Unless he tempers “naughty” with a special kind of nice . . .

Willa can’t deny that Keane’s changed since high school: he’s less arrogant, for one thing—but can she trust him not to break her heart again? It’s time to throw a coin in the fountain, make a Christmas wish—and let the mistletoe do its work . . .

Willa and Keane meet, for the second time (although this is news to him) when he enters her shop to see if she can help with his temporary cat, Petunia.

The relationship progresses from attraction to a real relationship between 2 people who are not sure about settling down, about trusting that a relationship can be permanent and something to pursue.

The movie, written by Joany Kane, follows the novel written by Jill Shalvis fairly closely.  There are some minor changes, but for the most part, the dialog and situations for the characters are excatly as in the book.  And, this is the point of Passionflix, to film the books we love in the way we love them.

This is the 3rd original production by Passionflix and it is one that really enjoyed.  The first 2, in my opinion, were a strong effort but there were some things about the movies that didn't totally work, but those issues did not appear in this title.  I believed the chemistry between Willa (Rachel Melvin) and Keane (Thomas Beaudoin) and, most importantly, I liked them.

The acting was strong in this, and I thought the dialog worked well spoken, which is a challenge with transferring a book to a film.  The settings were strong and the filming angles were also well done, allowing the settings to give a feeling of where the action was taking place, without overtaking the story.  This matters a lot as this is a Christmas story, so there is a lot of the Christmas decoration and "feeling" of Christmas throughout the story.

I recommend this movie.

Check Out the Movie!
IMDB
Passionflix