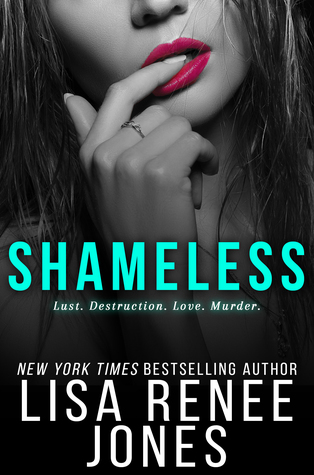 Nick "Tiger" Rogers, sought out Faith Winter with revenge as his agenda. He made her his obsession. He seduced her. He made her want him. He made here trust him. And then he trusted her. He wanted her. He loved her.
But now, the lies will be exposed, the truth revealed.
Hearts will be broken. Lives shattered.
Nick. Faith.
The truth. The passion.
The SHAMELESS obsession.

Books like this one are why I enjoy Lisa Renee Jones. This was so great, with great characters and scenes that were long enough that by the end of the book, you really felt that you know the characters.

And, that matters as this is a really character driven story, and knowing the relationships, the ties and the connections matters a lot.

This is also the second book in a duet, so any review is difficult as it gets really close to accidentally giving away a spoiler, so I am going to keep this short.

I enjoyed the writing, and the book overall. I did think the pacing at the end was a lot faster than at the beginning of the title, but that didn't really impact my enjoyment of the story.

I've been waiting for Shameless since I finished Provocative, which is book one in the White Lies Duet. I wanted to know what was going to happen with Nick and Faith-I had become invested in them and was left wanting more, which to me is the sign of a great book. Shameless did not disappoint me, either.

Shameless is hard to review plot wise without spoilers, so I'm going to avoid that completely. I'm going to say that I liked the growth we got to see these characters make. I loved seeing inside of both Nick and Faith as they navigated exactly what they were doing. I did like them both as people and thought together they really, truly worked. The chemistry they share oozes off the page.

I have to say the pacing of this book seemed a bit off to me. The beginning was definitely a slower start than I expected but the ending felt a bit rushed to me. I still enjoyed it but was surprised at the slower start.

This isn't my first book from Lisa Renee Jones and it won't be my last. While I do recommend reading the first book in this Duet before picking up this book, I definitely recommend it.