ALL OR NOTHING AT ALL BY JENNIFER PROBST-ARC REVIEW 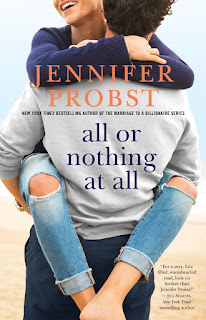 Tristan Pierce left the family business to carve out a life of his own, but never forgot his passionate affair with the much younger, inexperienced Sydney Green, or the hurtful break-up that tore him apart. When he’s forced to return home and face his past, will he be able to carve out a future, or will lies ruin his second chance at love?

Sydney Green loved Tristan her entire life, but when he left, he took not only her heart, but her trust with him. Now that they’re together again, it’s time they both face the biggest secret of all….

Wow.  I have enjoyed the other books in the series, but this one was by far my favorite.

Some books just work.  The appeal of the second chance, the changes in the relationship between Tristan and Sydney as the book develops, and their realizations about the things that happened in the past, and the why behind them, was really compelling.

This book drew me in from the beginning, and I was not able to put it down.  I also thought the plotting was interesting, as the way the book develops, and the way the characters develop, left me feeling differently at the end about Sydney's actions than I did at the beginning.  I think this was why I was able to connect so completely.  In order for them to have their happily ever after, Tristan has to forgive Sydney.  I found that I was also able to see her behavior differently, and that helped me being able to be really behind the end of the story.

Jennifer Probst is a favorite of mine, usually for this reason.  I am drawn into the characters and her writing just works for me.  This book was no exception.  I am sad to see the series go, but I could not have asked for a better conclusion.

It was time to be promoted to CFO.


And they had no idea it was coming.


Nerves fluttered in her stomach, but she ignored them.


Sydney walked back into her office with her coffee, her Jimmy Choo high heels sinking into the plush carpet. She’d dressed to impress in her designer Donna Karan apple-green suit and even managed to pin up her crazed curls in a semblance of professionalism. Her black-framed glasses added a flair of style and seriousness. After grabbing her flash drive with her PowerPoint presentation loaded, she quickly set up the conference room with her handouts and laptop, then brought in a tray of pastries from Andrea’s Bakery with a pitcher of water. Nothing wrong with a little bribing, especially when it involved sweets. She double-checked the room.


Perfect. She was ready. She picked up her mug for another sip. She’d calculated this quarter’s profits and could clearly show the margin of growth once she brought in this new—


She jerked at the deep, cultured voice breaking into her thoughts. Coffee splashed over the edge of her mug onto her jacket. Cursing, she swiveled her head, her gaze crashing into whiskey-colored eyes that were as familiar as her own beating heart. Familiar yet deadly, to both her past and her present. Why did he have to be the one who was here first? The man possessed an inner alarm clock that detested lateness.


She still hated the little leap of her heart when she was in his company, but it’d just become part of her routine. Kind of like eating and breathing.


Anyone else would’ve brought a smile and a bit of chatter. But Tristan Pierce didn’t talk to her. Not really. Oh, he lectured and demanded and judged, but he refused to actually have a conversation with her. Not that she cared. It was better for both of them to keep their distance.


“You scared me,” she accused. “Why don’t you ever make any noise when you walk into a room?”


Those carved lips twitched with the need to smile. Unfortunately, her presence rarely allowed the man to connect with any of his softer emotions, so he kept his expression grim. They’d been dancing around each other for two years now, and still struggled with discomfort in each other’s presence. Well, he experienced discomfort in the form of awkwardness.


She experienced discomfort in the form of sexual torture.


“I’ll work on it.” He gestured to the new brown stain on her clothes. “Need help?”


“I got it.” Her body wept at the thought of him touching her, even for a moment. Down, girl. She grabbed a napkin, dipped it in water, and dabbed at her suit jacket.


“I didn’t realize we were having a meeting today. I have some appointments.”


“I rearranged your schedule. This is the only time that everyone was able to meet.”


He didn’t ask any other questions. He rarely did.


She tried to ignore the waves of masculine energy that emanated from his figure. He’d always been the quiet one of his brothers, but he never needed words or noise to make his presence known. When he walked into a room, everyone noticed—men and women. He held a demeanor of competence and power in a whole different way from his brothers, Caleb and Dalton. As the middle child, he was a peacemaker and able to make decisions with a confident quickness most admired but never duplicated. His thoroughness was legendary. Tristan was able to see a problem from all angles and attack it with a single-minded intensity and level of control. He’d once brought that same talent to the bedroom, concentrating on wringing pleasure from her body with a thoroughness that ruined her for other lovers.


She studied him from under heavy-lidded eyes. His suits were legendary—custom made from the best fabrics and cut to emphasize his powerful, lean body. Today he wore a charcoal-gray suit, a snowy-white shirt, and a vivid purple tie. Engraved gold cuff links. His shoes were polished to a high sheen and made of soft leather. He always reminded her of one of those jungle cats who prowled with litheness, amber eyes lit with intention, taking their time before deciding what to do with prey. His analytical mind was as droolworthy as his body. Hard, supple muscles balanced with a beautiful grace most men could never pull off. His hair was thick, perfectly groomed, and a deep reddish brown. His face was an artistry of elegance, from the sharp blade of his nose to his square jaw, full lips, and high cheekbones. Lush lashes set off eyes that practically glowed, darkening to an intensity that made a woman’s heart beat madly. He was beauty incarnate, a feast for the senses a woman could never bore of while spending the rest of eternity studying every angle and curve and drowning in his cognac gaze.


She’d once been that woman. Of course, that was centuries ago, before the ugliness between them sprouted from dark corners and swallowed them up whole.


Didn’t matter. She only dealt with Tristan for work now, though the past two years had been more difficult, as she was forced to spend so much time in his presence. Those five years after he’d moved to New York and been away from Harrington were hard, but she’d finally grown up. Become a mother and made her own niche in life, rather than waiting for him to dictate her wants and needs.


If only she weren’t still attracted to the man.


Already the room surged with the innate connection between them. Some things never disappeared. They’d always had chemistry. Now it was just a matter of accepting it as fact and ignoring it.


Most of the time she managed.


“Let me settle in. We’ll start in fifteen?” he asked.


She turned away, discarding the napkin, and he left. She practically sagged in relief. Having him too close threw her off, and this morning she needed to be a poised, cool, confident professional.

Labels: 5 Stars, All or Nothing at All, ARC Review, Jennifer Probst, Review by Laura