THE STORY OF US BY TARA SIVEC-REVIEW 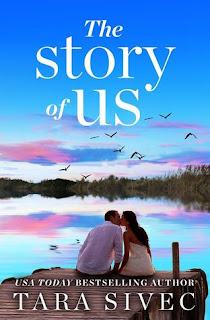 From USA Today bestselling author Tara Sivec comes an emotional, breathtakingly romantic new book about the power of first love and the promise of second chances.

How much can a man take before he breaks?

1,843 days. That's how long I survived in that hellhole. They tried to break me, but I resisted. And I owe it all to the memory of warm summer nights, the scent of peaches, and the one woman who loved me more than I ever deserved to be loved. Now, I'll do anything to get back to her.

Only Shelby Eubanks isn't the girl I left behind all those years ago. She's someone else, a stranger. My Shelby-my little green-eyed firecracker-would never give up her dreams, would never disappear into her mother's ambitions. But I won't give up on her. On us. I may be broken, and scarred, and not the man I used to be, but I will do whatever it takes to remind her of the story of us.

Eli and Shelby were together in high school and then life, the military, and things beyond their control both separated them and left Shelby thinking that Eli was dead.

Shelby moves on with her life, sort of, and gets quite a shock when it turns out that Eli is not only alive, but coming home after a number of years as a prisoner in a foreign country.

The angst is there, the stress and joy of the first time they see one another, the difficulty of finding common ground after that many years, and the stress of what they have both been through are all handled fairly well and in a way that I thought was realistic.

I liked so much of this book, the pacing was strong, the characters interesting and the writing was wonderful.  Right up until the end.

The last about 15% of the book took it from a strong 4.5 to the 3 that I have given it.  Not for the twist that appears, but for the timing of it.  I was not able to believe that the characters were able to get to their happily ever after in the time that was left for them in the book.

Saying what happens is a huge spoiler.  But I can say that if it had happened earlier, I would have loved it, and I would have been totally able to believe what was happening...but the combination of how much happened before you found out the twist, and there not being enough time for the issue to resolve, meant I was left feeling this book was close, but not quite there.

I do recommend this title, as I did enjoy it overall.
Posted by Booked All Night - Laura at 11:00 AM