KEEPING HER CLOSE BY SUZANNE ROCK-REVIEW 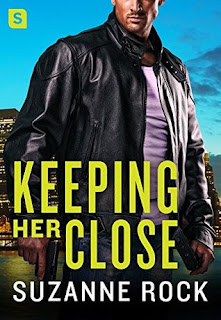 As the newest SWAT (Special Weapons and Tactics) Team member, Officer Maximo "Max" Ferreira is irritated that his first assignment is not diffusing a terrorist threat, but instead providing protection to the controversial blogger Tess Abbott during her lecture tour in New York City. He believes the job is nothing more than glorified babysitting but after one look at the sexy journalist, suddenly, his job is no longer a hardship.

The attraction between them is immediate, and Tess's take-charge personality in the bedroom is like a dream come true. Unfortunately, Tess is too wrapped up in her work to take their relationship seriously. When an attempt is made on her life, it will take all of Max's training to convince her to stop trying to handle everything on her own and stay where he can protect her best--in his arms.

I am not sure why now, but at the beginning I was not sure if I was going to finish this book, there was something about Tess who really rubbed me wrong and I had a really hard time relating to her. But, I liked the first book by this author, so I kept on. And, I did enjoy it overall.

I like the relationship between Max and Tess, I liked the idea that he wanted to be so protective while she wanted to be able to take care of herself. I also liked that the heroine was strong, that she was capable, and that you like her. It was funny, actually, that the character I did not like at the beginning was the one I really connected with at the end.

The pacing was good overall, but the end seemed to move a little more quickly than the beginning, although this might be related to the fact that I liked the heroine more by the end.