FALLING FOR THE FAKE FIANCE BY JENNIFER BLACKWOOD-REVIEW 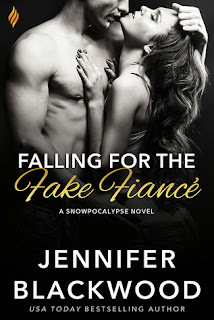 Jill Michaels prides herself on one thing: being independent. That is until her daughter gets into an elite school, and she needs money more than ever. It seems her fairy godmother—aka her deceased Grammy—has granted that wish in the form of one-fourth of her estate. The only catch? She must be married by her thirtieth birthday. In two months.

Aaron Collins is fresh out of the army and back in town to help his father’s failing business. When he runs into Jill at a hotel where she’s attending a single’s mixer, he makes sure she doesn’t make it past his room and into another guy’s arms. When he hears about her predicament, he has a plan: they’ll get married and keep it a secret. And maybe have a little sexy fun until he leave towns for his new job.

But letting go of the woman of his dreams may be harder than Aaron could have ever imagined.

I enjoy Jennifer Blackwood, and I enjoyed this overall.

The plot was a little predictable, but that is the way it often is in romance, as there are the expectations of a story that will follow a certain pattern, and have an expected ending, and that is ok.  What matters is the ride getting to that expected end.  This was a fun ride, even though the topic/situation they find themselves in isn't the most original, I found I didn't care, because I was enjoying it overall.

Jill and Aaron had wonderful chemistry and I enjoyed them together, I thought they worked well, and you believed the instant attraction as they had grown up together, so they were not total strangers, even though life had led them in different directions.  I liked this, and I think it helps with the ability to believe the events of the story.

I enjoy Jennifer Blackwood, and I was hoping to like this one as much as I did the first in the Snowpocalypse series, which I didn't...but I enjoyed it, it was well written, it was enjoyable, and I liked the characters.

Check It Out on Goodreads
Posted by Booked All Night - Laura at 1:00 PM