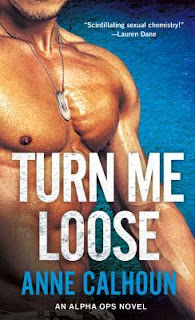 When she was on the verge of adulthood, Riva Henneman committed a crime and got caught red-handed. Luckily, she was busted by a HOT young cop...who also had a big heart. A one-time SEAL candidate, Officer Ian Hawthorn knew how it felt to have your dreams derailed. So he gave Riva a choice: face prison time or work for him as a confidential informant. But even a get-out-of-jail-free card comes with a cost. . .

Years later, Ian still remembers beautiful, innocent Riva--and the smoldering attraction they shared but both tried to ignore. Will they have a second chance, now that they're back in each other's lives? Riva's work with inner-city children has led to a surprise run-in with Ian, who has his own agenda--one that could put them both in grave danger. Is their desire worth the risk this time?

The high octane suspense and super sizzling romance continues with Turn Me Loose, the third novel in the Alpha Ops series by Anne Calhoun.

Riva and Ian have an amazing chemistry, one that both of them felt immediately and neither acted on when he was a cop and she was his confidential informant.  For understandable reasons.  This past also makes their present, including a surprise encounter, a little difficult to navigate.  The attraction is there, and the passion, but both feel that involvement with the other will result in upheaval to their lives and everything that they have each worked for.

It's then up to the author to convince the reader that the risks will be worth it. And, Anne Calhoun convinced me of their passion, their connection, and the idea that neither of them would be willing to let this pass them again.

I liked the story ARC, the passion, their connection, and the secondary characters.  That said, I was not entirely sure that the consequences of their relationship now, years after she was no longer his informant, we as dire as both were convinced, or as dire as the author wanted us to believe. Because of this, the parts focused on this as the reason they could not be together didn't totally work for me.  But, overall I believed in their relationship and I thought it worked well.

I am looking forward to other stories by this author and I recommend this title.

Buy The Book!
Amazon
Posted by Booked All Night - Laura at 11:00 AM