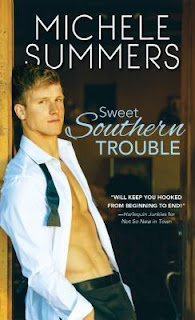 An ambitious Southern belle
Marabelle Fairchild knows she's a gal who can get things done. Feeling unappreciated at the exclusive private school where she's a kindergarten aide and varsity tennis coach, Marabelle determines to score with the next big fundraiser. What she doesn't expect? A smokin' hot football coach to throw her off her game...

A reclusive NFL bachelor...
NFL coach Nick Frasier is Raleigh's most eligible bachelor, but he wants to focus on his career...not his playboy status. He doesn't need a smart-mouthed, pint-sized kindergarten teacher pestering him. So he cuts Marabelle a deal—in exchange for Nick sponsoring a bachelor auction starring him and his gorgeous celebrity pals, Marabelle will pose as his fiancée to ward off unwanted advances.

What could possibly go wrong?

Marabelle and Nick were interesting together, and I mostly believed their relationship and their attraction.  Although, a lot of this was from the idea that the things Nick said to her and the things he was thinking are very different.

Once I got past this, I was mostly able to enjoy the story.  The writing was strong overall and the characters, after about the 25% mark were relateable and likeable.

I do recommend this title, with the caveat that it is a book that improves as you get farther into the story.  By the end, I did like Nick, even though I was not 100% sold on him, I do believe he honestly loves her, and that is really what matters.

Goodreads
Posted by Booked All Night - Laura at 1:00 PM