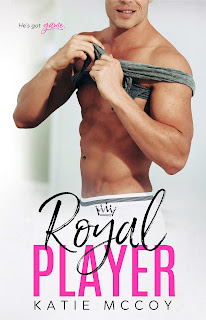 Charlie Davenport is the bad boy of British tennis - and third in line to the throne. He’s a beast on the courts, and a wild animal in bed (according to all the tabloids). Girls are lining up for chance at his crown jewels, and when I stumble into the wrong Wimbledon dressing room and catch a glimpse of his game, set, AND match, I can see why.

So what’s a little good luck kiss between f̶r̶i̶e̶n̶d̶s̶ strangers?

I know better than to get involved with a bad boy like Charlie. But now he’s on a winning streak, he thinks I’m his lucky charm - and you know what’s luckier than a kiss?

Suddenly, I've got paparazzi on my trail, exes coming out of the woodwork — and you don’t know ‘cutthroat’ until you’ve seen a pack of hungry socialites set loose near the Royal Family.

I’m in way over my head, and even worse - I’m falling in love.  Can this American girl win her Prince Charming? Or will we both crash out of the championships in flames?

Wimbledon-meets-The Prince and Me in this hilarious, sexy new romance from Katie McCoy!

I enjoy sports romances and I love romances with royalty. The fact that this blurb offered up both had me quite excited to read this book. Overall I did enjoy it, but I didn't love it the way I thought I might.

Royal Player gives us the story of Emmy and Charlie. Emmy is a young woman from the U.S. who happens to follow her friend across the pond to work at Wimbledon. Once there, very early on, she accidentally meets Charlie-who just so happens to be a Prince.

I liked both Charlie and Emmy-but I never got past the like stage with them. I thought they were believable as a couple but there were so many little things in the way of me getting fully invested in them. I think their chemistry was there-you can feel it from the first kiss. But as individuals I just didn't fully connect with either of them.

The writing of this book was good. The pacing was fine, but there was just something about the characters that I didn't fully invest in. This was a quick read for me and I will read more from this author in the future. I would recommend giving this book a try. 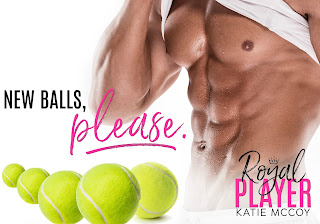 
Katie McCoy is a self proclaimed sushi addict, Cardinals baseball fanatic, and lover of all things theatrical. A St. Louis native transplanted to Brooklyn, she acts, sings, and shakes her booty when she isn't writing books about hot men and the girls who love them.