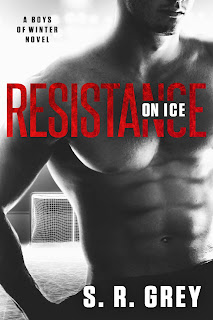 Praised by Wall Street Journal Bestselling Author Ilsa Madden-Mills as "the usual Grey crisp writing, lovable heroes that you kinda want to slap, and a heroine that doesn't back down," Resistance on Ice is another fun standalone novel in the Boys of Winter hockey romance series.

Hockey star Nolan Solvenson is nothing short of skilled perfection, both on and off the ice. Or so everyone thinks. His teammates are constantly hitting him up for advice, but really, when it comes to his own life, Nolan can't seem to make the right moves anymore.

Blame it all on Lainey Shelburne, a woman he wants but is determined to keep at arm’s length. That’s why, after a few sexy encounters, he unceremoniously blows her off.

When they’re reunited, facing off against the fiery cocktail waitress becomes the challenge of his life. Lainey is furious with him for dumping her and wants nothing more than to kick him in the junk. But Nolan—typical man—is only interested in getting Lainey back in his bed.

That plan is shot all to hell when they reach a shaky truce and Lainey drops the bomb that all she’s looking for now is a "just friends" relationship with Nolan.

Suddenly, the "know-it-all" athlete is skating on thin ice as he tries to hide his burgeoning feelings from the one woman who has the ability to thaw his heart. But is Lainey willing to try a relationship with him again? Can Nolan resist the urge to walk away?

Resistance on Ice is a fun standalone novel and the second installment in the bestselling Boys of Winter hockey romance series.

I have been waiting for this book since finishing Destiny on Ice, the first in S.R. Grey's Boys of Winter books. This book can be read as a standalone but I would recommend reading the first in the series to start. I adored Nolan and Lainey and loved getting to see how their story played out.

Nolan was a bit of a tough nut to crack-which just made me more desperate to find out why he was so anti-relationships. He was sexy, swoonworthy but he kept holding himself back. I wanted to push him, just like Lainey did, and the reward of him finally admitting what his problem was worth the wait to me. I sympathized with him even when I wanted to shake him.

I adored Lainey. I liked her free spirit, her determination. She was much more confident than most female characters I've read lately and I LOVED that. Lainey is the type of character I'd want as a friend in real life. She had me laughing out loud at some of her antics and I applauded her effort-and resolve-when it came to dealing with Nolan.

This book was a second chance romance-which I loved. I loved watching them figure out if the other person was worth it, trying to decide how they'd move forward with having each other in their lives. I will say the ending surprised me a bit but when I reflect back on it, it truly fits the characters.

This book was a fun read that I didn't want to end. I'm looking forward to the next book in this series and recommend this one for sure. 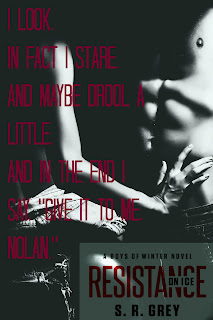 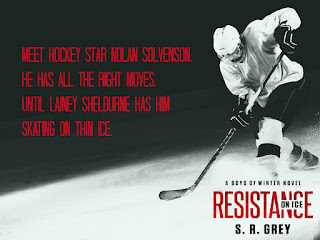 Scene set-up: Nolan is not happy about being interviewed by radio shock jock, Marty Quick, and there’s a good reason why….
Marty finishes up with his Stanley Cup questions, and goes straight to the place that had me dreading this interview in the first place.

“Let’s get to the good stuff, Solvenson,” he begins, grinning over at me like a perv. “Word on the street is you’re quite the ladies’ man.”

Looking down at the tiny table that separates me from the host in what has taken on the feel of a far too enclosed space, I run my hand through my dark hair. “I don’t know about that,” I reply. “Rumors are usually just that—rumors.”

He’s unconvinced, I can tell, but too bad. This is a question I plan to evade like my reputation depends on it. And it may. After I fucked things up with Lainey back in April, I was so distraught that I sought out solace in the form of a slew of strippers.

And I don’t mean I found comfort in being with a new one night after night.

Er, though I may have done some of that too.

“Aw, come on,” Marty continues in his patented taunting tone. “All of Canada—no, wait, all of North America wants an answer.” Shit, this show does have a far reach. “Is it true you banged ten strippers in one night?”

It was actually nine and occurred over the course of two days, but who’s counting?

Not me. And not anyone else if I have anything to say about it. Besides, the only thing that matters is I’m not technically lying.

See, that’s my shtick in life—being clever, outwitting everyone. I’m a wise old sage at the age of twenty-six. My teammates call me things like “sensei” and “Yoda.” And, hey, I’m cool with that. Why wouldn’t I be? It works out great for me.

That’s why if I stick to the gray areas now with Marty, I can successfully evade giving him a straight answer for the next ten minutes, the time left in the interview.

Yeah, you’re real clever all right. So clever you outwitted your own damn self with the shit you pulled with Lainey.

“You look a little uneasy there,” Shock Jock observes when he sees me frowning. “You sure there’s not even a modicum of truth to that stripper story.”

I need to get out of here, and fast. I’m done talking about strippers. And I’m done with this shitty interview. But most of all, I’m done with staying away from Lainey. It’s time we have a talk—a real talk.
And if talking doesn’t work, I’ll do what I do best—fuck her till she agrees to start seeing me again. 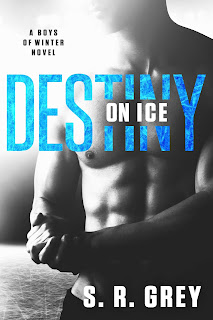 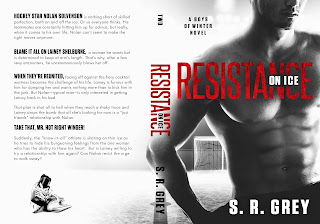 S.R. Grey is an Amazon Top 100 and a #1 Barnes & Noble Bestselling author. She is the author of the brand new Boys of Winter hockey romance series, the popular Judge Me Not books, the Promises series, the Inevitability duology, A Harbour Falls Mystery trilogy, and the Laid Bare series of novellas. Ms. Grey's works have appeared on multiple Amazon Bestseller lists, including Top 100 several times. She is also a #1 Bestselling Author on Barnes & Noble and a Top 100 Bestselling Author on iTunes.
Author Links