It was just supposed to be a regular Thursday afternoon…and then he saw her. Sitting in seat L214, one seat over from his at the baseball game, right next to her douche of a soon-to-be-ex-boyfriend. An impromptu kiss for the kiss cam, and Jax knew his life would never be the same. Five years and a tour in Afghanistan later, Jax is back stateside running his own private security firm, Iron-Clad, with his best friend. He isn't the man he used to be... but Megan isn't the sexy and sweet, though sheltered, twenty-two-year-old he left behind, either. And she's in trouble.

Megan Cruz has made something of herself. She’s turned her dreams of pop stardom into a reality. But when a deadly stalker breaks into her home claiming to be her number-one fan, the only person she can turn to is the boy who got away. But Jax isn’t the same carefree charmer who stole her heart, then broke it when he joined the military. This man is seductive, hard, guarded. And he'll do anything to protect what's his.

I ended up liking this story a lot, more than I thought I was going to, actually.  And, I credit the author with this, as I usually really like Ms. Halston's writing and stories.

The idea of a celebrity who is being stalked falling for the bodyguard is, honestly, not new.  It was freshened up, a little, by the second chance romance aspect.  But, it was the way the second chance was handled, the slight difference in the way it played out years ago, that resulted in this one feeling more new and different than I was expecting.

Jax and Megan were both interesting and well written.  I was able to engage with both of them, and to understand what they were thinking.  This definitely matters in a second chance, as you need to be able to see why they made the decision to split and also why they were willing to make it work a second time, 5 years later.

I thought the resolution of the stalker thing was a little obvious, but not enough that it took away from the story, as that was really there to give Jax and Megan a reason to be together than for any real major suspense in their story.


I recommend this book overall and I am looking forward to the next ones in the series.

#1 New York Times bestselling author Lauren Blakely brings another exciting and sizzling audiobook to listeners in her upcoming title, A ... 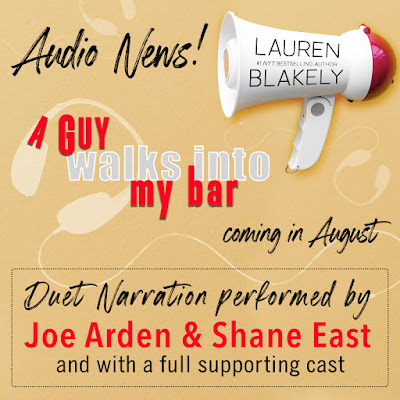