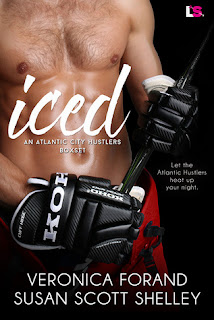 When a sexy, forbidden spark blazes to life between professional hockey player Zac Elliott and the team owner's daughter, he's willing to risk being benched to have her. Their relationship is deeply passionate and intensely private...until the press catches them in the act. The only way out of the penalty box is for Zac to play hockey like life--and love--depends on it...

Physical therapist Annie Davidson is great at her job but unlucky when it comes to love. All she can do is focus on work...that is until she runs into professional hockey player Alec O'Meara. Alec likes to keep things loose on and off the ice, but the red-headed Annie challenges his beliefs and makes him think about taking their relationship to the net...

Flirting on Ice and Simmering Ice are 2 novellas that are combined together in this book.

Flirting on Ice is the story of Zac and Heather.

While I enjoyed this one, I felt a little like I was dropped into the middle of the story, with the attraction already between them. It was definitely insta-love and while that is ok, I like to be there from the beginning of the instalove story, so I was not as able to connect with this one.

Simmering Ice is the story of Annie and Alec.

I thought Simmering Ice was the stronger of the 2 stories, and it also built on the story in Flirting on Ice. I think, in this case, the fact that they evolved together left this the stronger story. I also tend to really like the stories where the woman is accomplished in her own right, especially when they center on the male sports hero and how accomplished he is.

Of the 2 stores, I thought this was stronger. In part I think as there is more backstory, not only from the first book but also because this one is longer and a little more character development is allowed to happen.

I recommend both books and definitely recommend them as a box set.