“Count on Scarlett Cole to give you everything you want in romance!” 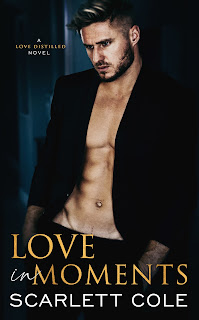 Swedish hockey player, Anders “Iceberg” Berg, is counting the days until he’s an unrestricted free agent and can land the contract he’s worth. Yet, instead of recovering and resting at home so he can play to impress his dream organization, he’s in Denver for his brother’s wedding at a gin distillery, watching the pretty brunette who organized the whole thing.
Olivia Dyer can’t wait to put the year behind her. Her father died, and the event hall she ran at her family’s distillery was destroyed. The cost to the business and her mental health more than she could ever afford to repay. Rebuilding both takes all her effort leaving little time for anything else. Except for a single night of fun with the hot hockey player who’s been watching her every move.
When a kitchen catastrophe throws Anders and Liv together, it ends with an evening neither of them can forget. It was only meant to be one night. But when Anders is unexpectedly traded to see out the rest of his contract with the Denver Rush, and his plans to leave as quickly as possible are disrupted by the sultry brunette who defines courage, their only option is to give to the attraction they feel for one another.
Yet with Liv stuck in the past and Anders firmly focused on the future, can they put aside their differences and allow themselves to find love in the present?

Scarlett Cole is a contemporary romance author that calls both Toronto, Canada and Manchester, England home. A born city dweller, she periodically quashes the urge to live in the country by hiking up a mountain to remind herself that living away from people would terrify the pants off her.

She believes everybody deserves their love story to be told and loves her heroes on the rough and rugged side…and usually tall (because she married one of those 6ft 6” men you read about in romance!). She’s an A-type personality and Scorpio star sign, so good luck getting her to do anything she doesn’t want to.
When she isn’t writing, she’s happy to talk hot men and expensive shoes while drinking a cold gin and tonic. Don’t bring up olives. As far as Scarlett is concerned, they are the devil’s food. As long as you don’t bring up olives, she’s happy to hear from any time.