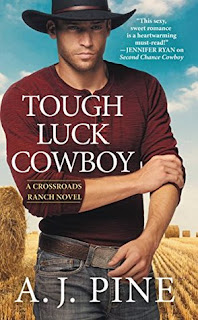 The only girl he ever wanted was the one he could never have.

What's the saying, bad luck comes in threes? If so, Lily Green is due for something good. First, her divorce is finalized---on her birthday, no less. Then the first job she lands for her catering company turns out to be for her ex-husband's wedding. To top it off, she's stuck working the event with Luke Everett, the sexy-as-hell best man who's never been able to stand her. When can a girl catch a break?

For years, Luke has kept his feelings for Lily safely hidden. Hitting on his best friend's ex-wife would definitely break the cowboy code of honor. But ever since an injury sidelined his rodeo riding, the two of them keep getting thrown together. It's only a matter of time until his true feelings come to light. When that happens, it will either be the biggest mistake of his life, or a sign that his luck is about to change.

Luke and Lily hate each other.

Well, actually, Luke doesn't hate her at all, he's in love with her, and she is married to his best friend.

And, then she isn't...so she is free to pursue a relationship with him, to act on the chemistry that he has always felt and that she sees as existing as the flip side to their dislike of one another.

Lily is catering her ex-husband's wedding...in one of those quirks of life that are totally believable, and happen in a way in this book that you see coming, even though it's obvious she doesn't.  As Luke is the best man, it's tough to avoid one another.  Until they both realize they don't want to, that the attraction is more than they can ignore.

So, they have a one time, get it out of their system fling.  And, that works as well here as it ever does, and it quickly becomes more.  But, how?  She is the ex wife of his best friend, he is a rodeo cowboy who is ignoring the risks, and betting on himself, to have one last ride and leave the sport on his terms.

A.J. Pine handles all of this exceptionally well.  You want these people happy, you want Luke to have his time in the spotlight and leave his port on his terms, and you believe hum when he says he knows the risks, knows what he is capable of, and will be fine.  Although, I must admit to being teary when the scene actually happens.

Really, what can you ask for that is more than being so connected to a character that you cry for them and with them?

I loved this book, and I recommend it...and the first one in the series as well.

BUY THIS BOOK!
AMAZON
Posted by Booked All Night - Laura at 9:30 AM