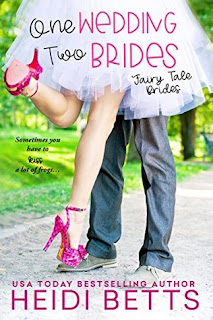 Jilted bride Monica Blair can’t believe it when she wakes up next to a blue-eyed, smooth-talking cowboy in the middle of nowhere and with a ring on her finger. It had sounded like a great plan at the time. Get married, get revenge, and get her money back. So why is she cleaning out stables and trying to keep her hands off the hot cowboy helping her?

Ryder Nash would have bet his best Stetson that you’d never see him walk down the aisle. But when the city girl with pink-streaked hair and a frog tattoo hatches a plan to expose the conman who married his sister, no idea is too crazy. And even though Monica might be the worst rancher’s wife he’s ever seen, he can’t stop thinking about the wedding night they never had.

What was supposed to be a temporary marriage for revenge is starting to feel a little too real...

I loved the meet-cute in this.  Or rather the meet-jilted-and-tipsy.

Monica was supposed to marry the same man that Ryder's sister just married.  So, in her mind (drunk where bad ideas make sense) crashing the wedding, and showing him what he lost, and also showing the bride the loser she married, seems like a good idea.

Ryder to the rescue, of both Monica and the bride and groom (although, that turns out as you want it to once you hear Monica's story) and off she goes to his ranch.  His troubled ranch, the one he is in danger of losing and is struggling to make ends meet.

A revenge marriage plot is formed, the money Monica has is promised to Ryder, and sparks start flying...the money isn't where it is supposed to be, the marriage is becoming more and more real, and the relationship neither of them were looking for is looking like exactly what they want.

It's not easy to get them to the Happily Ever After, but it was fin and enjoyable.  I am not sure I totally believed the premise, but hey, why not?

I laughed, I enjoyed this title, and I recommend it.