OFF THE GRID BY MONICA MCCARTY- ARC REVIEW 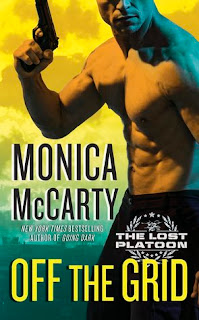 A hunt for dangerous secrets leads to explosive chemistry in this exhilarating romantic suspense novel from the New York Times bestselling author of Going Dark.

A team of Navy SEALs go on a mission and disappear without a trace--they are The Lost Platoon.

Investigative reporter Brittany Blake may have stumbled upon the story of a lifetime in her search for her missing brother. When he seemingly disappears overnight, she refuses to accept the Navy's less-than-satisfying explanation. She begins her own investigation, which leads her to top-secret SEAL teams, covert ops, and a possible cover up...

John Donovan is having trouble biding his time, waiting for his Commanding Officer to figure out who set up their platoon. John's best friend and BUD/S partner, Brandon Blake, was one of the many lives tragically lost in the attack against his team. When Brandon's sister, Brittany, tracks John down, looking for answers, he realizes that she may be their best bet--or bait--for finding out who is targeting SEAL Team Nine.

In order for a romantic suspense to work, you have to believe that the connection is strong enough for the characters to be able to form a connection while, sometimes literally, being chased by people who are shooting at them.

Brittany and John have this past connection, and a bit of a forbidden relationship as her brother warned John away from him years ago...but, part of the reason they are together now is that her brother has been killed, and Brittany is determined to find out why...even at the cost of the safety of the men who lived through the same mission and are in hiding.

I believed the romantic aspect of this book, and I also believed the suspense.  All of the elements were there for me to be willing to accept that both were happening simultaneously.  There were a couple of places where I felt it dragged a little, and there was a subplot that worked and felt unnecessary at the same time, but I enjoyed it overall.

BUY THIS BOOK!
AMAZON
Posted by Booked All Night - Laura at 4:00 PM