THE OTHER LADY VANISHES BY AMANDA QUICK - ARC REVIEW 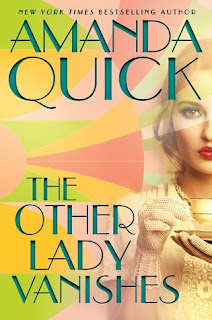 The New York Times bestselling author of The Girl Who Knew Too Much sweeps readers back to 1930s California--where the most dazzling of illusions can't hide the darkest secrets...

After escaping from a private sanitarium, Adelaide Blake arrives in Burning Cove, California, desperate to start over.

Working at an herbal tea shop puts her on the radar of those who frequent the seaside resort town: Hollywood movers and shakers always in need of hangover cures and tonics. One such customer is Jake Truett, a recently widowed businessman in town for a therapeutic rest. But unbeknownst to Adelaide, his exhaustion is just a cover.

In Burning Cove, no one is who they seem. Behind facades of glamour and power hide drug dealers, gangsters, and grifters. Into this make-believe world comes psychic to the stars Madame Zolanda. Adelaide and Jake know better than to fall for her kind of con. But when the medium becomes a victim of her own dire prediction and is killed, they'll be drawn into a murky world of duplicity and misdirection.

Neither Adelaide or Jake can predict that in the shadowy underground they'll find connections to the woman Adelaide used to be--and uncover the specter of a killer who's been real all along...

Amanda Quick is a favorite of mine for a reason.  I know that, no matter the plot, or the characters, of the setting, I am going to enjoy all 3 elements of any story she writes.  The plot will be engaging enough that I am entertained and interested in the story, the characters will be just a little quirky, but charming for their slight eccentricities, and the setting will be a part of the story, not an overwhelming one, but it will be a part of the story.

Adelaide and Jake were charming.  Yes, they had their little quirks and their ways of dong things that were funny, and maybe a little fussy, but they worked for one another and for the story.  As is often the case, there is more going on in this story than originally meets the eye, what with drugs, and involuntary commitments to psychiatric hospitals, and murdered psychics...but there is also a charming, quirky, and almost low-key romance that fills in the story so it is full and enjoyable.

If you have read a title by this author, you know what to expect.  Amanda Quick has a certain writing style that, I think, either pulls you in or it doesn't...although I really haven't ever met someone who has read a book of hers and didn't like it (my husband has even read a couple, although don't tell him I told you.)

I recommend this title, and I enjoyed it.

Amazon
Posted by Booked All Night - Laura at 5:00 PM