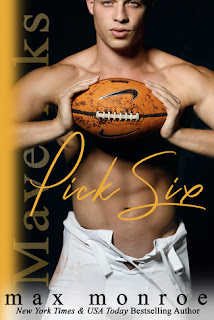 His quick moves and sure hands extend way past the lines of the football field—and into the bedroom.

Sure of himself and sure of his life, Sean’s convinced he can handle anything. But when beautiful, pint-sized Six Malone delivers a challenge he’s never faced before, his certainty starts to waver.

Six Malone is a force to be reckoned with.
Feisty. Hilarious.
The popular YouCam vlogger Pick Six.

The chance to work with the Mavericks on an eight-episode vlog series is the opportunity of a lifetime, and Six knows it.
But after an interesting first encounter turns into a head-to-head battle with cocky football star Sean Phillips, her attention shifts—to keeping herself from falling in love.

Too bad spending time with the team is part of the job, and Sean has a flawless track record…of getting what he wants.

Pick Six: A term used when a quarterback throws an interception and a defensive player returns it for a touchdown, resulting in six points.

Clearly Max Monroe are not new authors for me so I've met some of these characters before. If you haven't, you could start here with this book and be ok but I'd go back to the Billionaire Bad Boys series and start there...but I'm telling you now, Kline Brooks is mine (no matter what Georgia says). So for me, reading this book allowed me to catch glimpses of characters I've already grown to love, and gave me the opportunity to fall for a new book boyfriend with Sean.

Sean was pretty upfront about who he was, right from the start. He didn't try to hide his past manwhoreish ways, as some might when faced with a Vlogger in their midst. He stayed true to himself and showed his sweet and funny side too. Did I mention he's a football player? Yeah, I kind of have a weakness for those.

Six gave me some trouble. I thought she was fun in the beginning, I really did. She's smart and strong and sassy, but she made me want to shake her way more than once. I had a hard time reconciling how she spoke about Sean at times, but in the end I think I understood her.

There's definitely chemistry there. There's hot and steamy moments, and there's funny moments, too. I've come to expect and appreciate that balance from these authors.

As I said, it was fun to see old characters come back into play. They didn't overwhelm the story (one character sometimes does that...but he really didn't here) and I thought they provided a nice balance to Sean and Six.

The book moved really quickly for me. I don't know where Max Monroe comes up with their ideas but I look forward to what they bring us next. I enjoyed this title overall and recommend it. 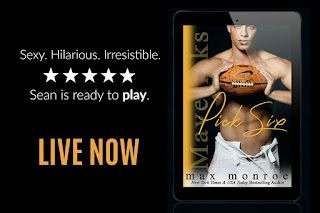